This is the first time that the two Bihar leaders have been seen together on a stage after Nitish Kumar had snapped ties with RJD and Congress in what was known as Mahagathbandhan in Bihar to join hands with BJP in July 2017. 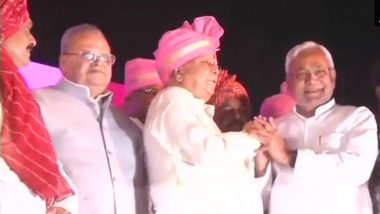 Patna, May 12: As reports emerged earlier in the day, Bihar Chief Minister Nitish Kumar attended the wedding of RJD chief Lalu Prasad Yadav's elder son Tej Pratap Yadav and Aishwarya Rai. This is the first time that the two Bihar leaders have been seen together on a stage after Nitish Kumar decided to snap ties with RJD in Bihar. The RJD-JD(U) combine along with Congress which came to be known as "Mahagathbandhan" (Grand Alliance) had won the Bihar assembly elections in 2015 and had come to power in the state despite a Modi wave that had swept the 2014 General Elections. However, Nitish snapped ties with the Mahagathbandhan. The fall out was bitter, as the ruling coalition partner RJD had turned into opposition party after Nitish Kumar's decision. Nitish was then sworn in as the Chief Minister a day after with BJP's support and joined BJP led NDA back. Here are the pictures of the RJD chief and Bihar CM Nitish Kumar:

The list doesn't stop with Nitish Kumar. Many high profile leaders and personalities are expected to be part of the marriage ceremony. Bihar's popular 'litti-chokha', Amritsari kulcha, imarti, gulab jamun, karhai paneer and kulfi besides continental dishes will be served to the guests.

The high profile wedding, which according to reports is set to see over 10,000 guests (an estimate given by RJD leaders), has been the talk of the town as speculations over Lalu Yadav's parole heightened as the marriage date approached. Lalu was finally granted a 3 day parole which got extended to 6 weeks just a day before marriage. Earlier, the RJD chief had applied for a 5 day parole but had been granted a 3 day parole only to attend his son's wedding.

Tej Pratap Yadav is getting married to the daughter of RJD leader and lawmaker Chandrika Rai and grand daughter of former Bihar CM Daroga Rai. The engagement ceremony had taken place on April 18 but Lalu could not be part of it as he has been serving jail term in Birsa Munda Jail in Jharkhand after getting convicted in the fodder scam case. He is currently out on six-weeks parole for attending son Tej Pratap's marriage and on medical grounds. (With Agency Inputs).

(The above story first appeared on LatestLY on May 12, 2018 10:40 PM IST. For more news and updates on politics, world, sports, entertainment and lifestyle, log on to our website latestly.com).