Tej Pratap Yadav Exposes a Little too 'Much' While Taking Bath at Handpump, Video Goes Viral

Tej Pratap Yadav has been trying hard to cast himself in the mould of his father Lalu Prasad Yadav by his eccentric acts and utterances in the public. 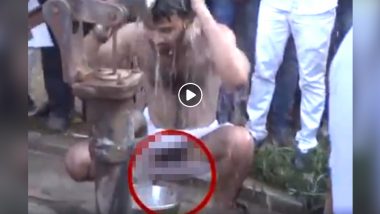 Patna, July 11: Tej Pratap Yadav, the former health minister of Bihar and elder son of Rashtriya Janata Dal (RJD) chief Lalu Prasad Yadav, is once again in news after a video of him taking a bath openly in public has gone viral. The RJD leader, who has now made a name for himself thanks to his eccentric acts and utterances in the public, is often in news and mostly for the wrong reasons.

But in a recent video featuring the RJD leader, his publicity stunt of taking a bath when he visited a Dalit's home went all wrong and exposed Tej Pratap Yadav's 'modesty', resulting in embarrassment for the leader.

Here is the censored video of the RJD leader and former health minister, taking bath in Karhatiya panchayat area in Mahua in Bihar. Watch the video:

A few days back, Tej Pratap had tweeted that he was not given due respect in his party and complained saying that his even his younger brother and face of the party, Tejashwi Yadav, was not listening to him. He had even passed a hint saying that he would retire from politics.

Then again, there was news that he would be making his bollywood debut after a poster of his movie Rudra was shared by him on Twitter. But after a few days, he said that his official handle was hacked by the Bharatiya Janata Party (BJP) and refused the news of rift between him and his brother.

Recently, Tej Pratap crowned his brother Tejashwi Yadav at a public function. The truth is that Tej Pratap has been trying hard to cast himself in the mould of his father Lalu Prasad Yadav by trying to come across as someone who is connected with the ground cadre of the party and has a sense of humour. But one is not sure if his acts are fetching the intended results.

(The above story first appeared on LatestLY on Jul 11, 2018 02:58 PM IST. For more news and updates on politics, world, sports, entertainment and lifestyle, log on to our website latestly.com).