Tirath Singh Rawat Sworn In as Next Chief Minister of Uttarakhand 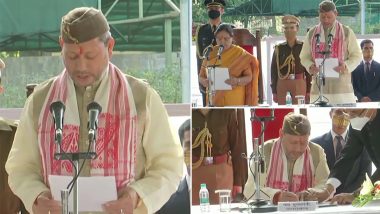 Tirath Singh was reportedly picked for the CM post over prominent candidates, including Union Education Minister Ramesh Pokhriyal Nishank. He was the first education minister of Uttarakhand. In 2012, he was elected as legislative assembly member (MLA), and in 2013, he served Uttarakhand BJP Chief from 2013-15. Tirath Singh was elected as MP from Pauri Lokasabha Seat on May 23, 2019.

Trivendra Singh Rawat stepped down from the CM post almost two days after reports surfaced about leadership change in the hill state. Several ministers of the state were not happy with the working style of Trivendra. On Saturday, the BJP leadership sent former Chhattisgarh Chief Minister Raman Singh and Gautam as observers to meet state leaders and get feedback. Trivendra Singh Rawat Resigns as Uttarakhand Chief Minister; All You Need to Know About The Political Crisis in The Hill State.

Around 10 MLAs, including four ministers, even camped at Delhi against Trivendra. Assembly elections for 70-member Uttarakhand Vidhan sabha will take place in February next year. At present, the BJP has 57 MLAs in the assembly.

(The above story first appeared on LatestLY on Mar 10, 2021 04:32 PM IST. For more news and updates on politics, world, sports, entertainment and lifestyle, log on to our website latestly.com).