The historic Shivaji Park, which has a memorial of Shiv Sena founder Bal Thackeray, will witness the swearing-in ceremony of Maharashtra Chief Minister-designate Uddhav Thackeray today. 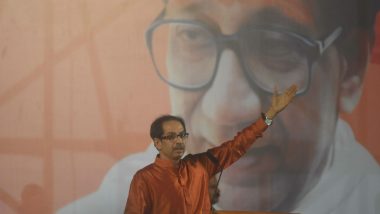 Mumbai, November 28: The historic Shivaji Park, which has a memorial of Shiv Sena founder Bal Thackeray, will witness the swearing-in ceremony of Maharashtra Chief Minister-designate Uddhav Thackeray today. Governor Bhagat Singh Koshyari will administer the oath of office and secrecy to Uddhav Thackeray who will be the first from the Thackeray family to hold a constitutional post. Uddhav, who spearheaded the Shiv Sena after taking over reins from his father Bal Thackeray, was on Tuesday unanimously elected as the leader of the Maha Vikas Aghadi, comprising the alliance of the Shiv Sena, the Nationalist Congress Party (NCP) and the Congress. Maharashtra Government Formation: List of Probable Ministers From Shiv Sena, NCP and Congress.

A delegation of the Maha Vikas Aghadi late on Tuesday met Governor Koshyari and staked claim to form the government. This came after hectic parleys and the end of a short-lived government formed by Bharatiya Janata Party (BJP) leader Devendra Fadnavis with the help of NCP leader Ajit Pawar. At the crack of dawn last Saturday (November 23), a two-member government comprising Chief Minister Devendra Fadnavis and Deputy Chief Minister Ajit Pawar was sworn-in, leaving the state and country in a daze. However, that government barely completed 80 hours in the office. Uddhav Thackeray Swearing-In Ceremony: Arvind Kejriwal to Skip Shiv Sena Chief's Oath, Here's Why.

The drama ended a few hours after the Supreme Court ordered a floor test in the Maharashtra assembly while hearing a petition of the Maha Vikas Aghadi against the Fadnavis government. Sensing a defeat, Ajit Pawar resigned, followed by Fadnavis. Following the collapse of the Fadnavis government, senior leaders from the Shiv Sena, the NCP and the Congress met and elected Uddhav Thackeray as their leader. After he was unanimously elected as the 'Maha Vikas Aghadi' nominee for Chief Minister, remembered his late father Bal Thackeray and thanked Congress President Sonia Gandhi and NCP chief Sharad Pawar for the trust reposed in him. Devendra Fadnavis Elected as Leader Of Opposition in Maharashtra Assembly Hours Before Uddhav Thackeray's Swearing-In.

On Wednesday, Uddhav Thackeray called on Governor Koshiyari at the raj Bhavan. He was accompanied by his wife Rashmi for their courtesy visit to the Governor's House. Late on Wednesday, Uddhav's son Aaditya Thackeray met Congress Interim President Sonia Gandhi and former Prime Minister Dr Manmohan Singh in Delhi and invited them to his father's swearing-in ceremony. Several other politicians, including all Congress Chief Ministers, have also been invited.

According to the power-sharing agreement between the three parties, the Sena and the NCP will have 15 ministers each and the Congress 12 in the ministry apart from the Speaker's post. In the October 21 assembly elections, the BJP emerged as the single largest party winning 105 seats, and along with its longtime ally, Shiv Sena was in a comfortable position to form a government. The Shiv Sena, however, with 56 legislators refused to join the BJP in forming a government, insisting on rotational chief ministership. Uddhav then formed an alliance with the Congress and the NCP which had won 44 and 54 seats, respectively.

(The above story first appeared on LatestLY on Nov 28, 2019 12:03 AM IST. For more news and updates on politics, world, sports, entertainment and lifestyle, log on to our website latestly.com).