Mamata Banerjee will contest from Nandigram in the West Bengal Assembly Elections 2021. The announcement was made by the West Bengal Chief Minister on Monday. Nandigram was represented by rebel Suvendu Adhikari. 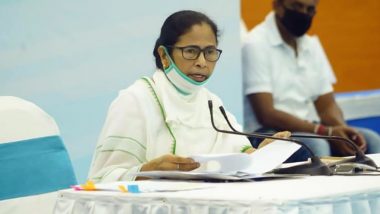 During a rally in Nandigram, the West Bengal CM said, "I will contest from Nandigram Assembly. If possible I will contest from both Bhawanipur and Nandigram." Notably, West Bengal Assembly Elections are scheduled to take place in May this year. The BJP is trying to make inroads in West Bengal in these assembly polls. Adhikari had resigned from the Assembly and joined the BJP in the presence of Union Home Minister Amit Shah on December 19 at a rally in West Midnapore's college ground. West Bengal Assembly Elections 2021: Congress Leader Adhir Ranjan Invites Mamata Banerjee to Join Congress to Defeat BJP.

In 2007, Banerjee led protest against the West Bengal government’s SEZ project in Nandigram. She started campaign in support of farmers in the district. At least 14 people were also killed in clashed between police and the protesters. Banerjee’s movement in support of farmers is widely considered to be one of the contributing causes to her landslide victory in 2011.

(The above story first appeared on LatestLY on Jan 18, 2021 02:29 PM IST. For more news and updates on politics, world, sports, entertainment and lifestyle, log on to our website latestly.com).