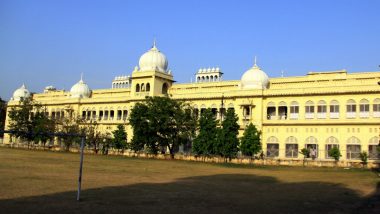 The chief proctor of the university lodged a complaint with the Hasanganj police station in this regard on Sunday. The miscreant is yet to be identified.

The pornographic images and obscene messages were posted late on Saturday night in the WhatsApp group that was created by a female student on the direction of the faculty for sharing paper presentations.  Uttar Pradesh: Police to Get Immediate Intimation if Users Search Pornographic or Obscene Content Online

Around 170 BA students were added via a link circulated by the teachers to get automatically added to the group.

Some students exited after posting lewd messages and later re-joined the group.

Students say that the mobile number of the miscreant which was showing in the group, belonged to a male student of the same class. When the latter was asked, however, he denied his involvement.

"Around 11.58 p.m. on Saturday, the first sexually explicit picture was posted on the group with the name and phone number of our male classmate. The picture was followed by a message that targeted four girl students through lewd messages," said a girl student.

She said that the person continued with abusive and objectionable language for female students of the class and teachers as well.

In the screenshots of the group shared by students, a number of messages from female students requesting faculty, late at night, to look into the matter and take strict action could be seen.

Even after repeated requests, the unruly element dropped a second message abusing four male students of the class and went on to tarnish the name of a faculty member. He then again posted pornographic images.

"When the abuses crossed all limits and objectionable words were used for our faculty member, I took to Twitter, tagging vice-chancellor Prof A.K. Rai and dean, student welfare, Prof Poonam Tandon to look into the matter," said one of the students.

When no action was taken by the LU authorities, nearly 50 per cent of the students exited from the group in protest.

Later, on Sunday, a complaint was forwarded by AIHA head of department Prof Piyush Bhargava to the LU proctor office on the basis of which an application for an FIR was given by chief Proctor Dinesh Kumar at Hasanganj police station.

"We have lodged a police complaint with the Hasanganj police station in this regard. Also, we have shared a screenshot of the WhatsApp group and the phone number which was used along with the name and contact number of the student who was named in the obscene messages," the proctor said.

Online communication tools have emerged as a big support for education during the pandemic but cases like this have also been on the rise.

(The above story first appeared on LatestLY on Jul 19, 2021 10:29 AM IST. For more news and updates on politics, world, sports, entertainment and lifestyle, log on to our website latestly.com).