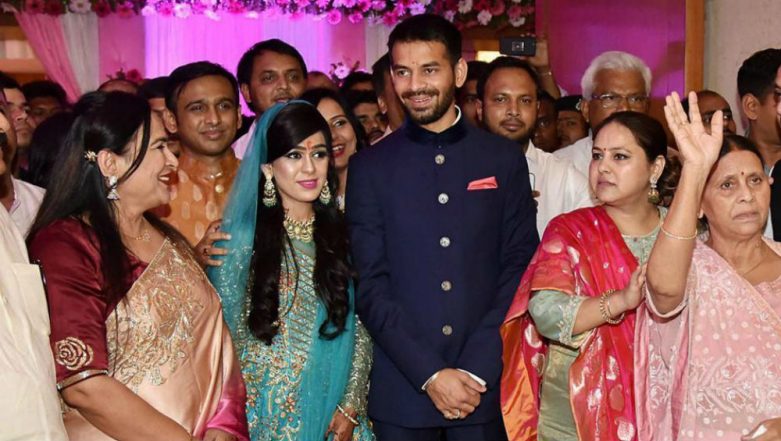 Patna, May 12: Opposition leaders gathered here on Saturday to attend the wedding of RJD chief Lalu Prasad's son Tej Pratap Yadav, the festivities made brighter by the presence of the now-jailed former Bihar Chief Minister.

Lalu Prasad arrived here on Thursday from Ranchi on parole for three days to attend the elder son's marriage. But on Friday, the Ranchi High Court granted him six weeks bail.

More than 30,000 people were set to attend the event, and many had poured in from all across Bihar, Jharkhand, Uttar Pradesh and West Bengal, RJD state President Ram Chander Purve said.

"There will be 200 items in the lavish dinner," a staffer at Lalu Prasad's residence said.  The marriage venue has been decorated with flowers from Thailand.

The venue is a sprawling veterinary college ground, spread over 9,000 square metres, RJD leader Shakti Yadav said.  All of Lalu Prasad and his wife Rabri Devi's seven daughters are married. The younger son, Tejashwi Yadav, a former Deputy Chief Minister, is also single yet. "Laluji is enjoying every moment with his family," an insider said. Lalu Prasad was jailed in December after conviction in the fodder scam.