In a shocking revelation, the Kanpur administration has found that a Pakistani national sold off the Ram Janki temple and some other properties. 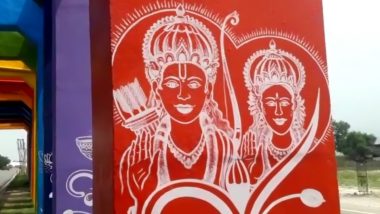 Kanpur, May 19: In a shocking revelation, the Kanpur administration has found that a Pakistani national sold off the Ram Janki temple and some other properties.

The office of the custodian of enemy property has now begun the process to enlist the temple and two other properties as 'enemy' property. Gyanvapi Masjid Survey: Varanasi Court Sacks Advocate Commissioner, Grants Survey Team 2 More Days To File Report

Notices have also been issued to those who bought the temple, dismantled it to make a restaurant.

Col Sanjay Saha, chief supervisor and consultant, office of custodian of enemy property, said, "We have given two weeks' time to these people to respond. We are waiting for them to reply to five specific questions. No response has yet been received."

The property in Beconganj was sold by a Pakistan national Abid Rehman in 1982 to one Mukhtar Baba who had a cycle repair shop in the temple complex.

Abid Rehman had migrated to Pakistan in 1962 where his family was already living.

He returned briefly to sell the property to Mukhtar Baba who then evicted 18 Hindu families from the premises and later built a hotel.

According to Kanpur Municipal Corporation records, the property is still listed as a temple.

The report was later sent to the office of the custodian of enemy property.

Meanwhile, Mukhtar Baba's son Mehmood Umar said that he had all the necessary papers and would soon respond to the query posted to him.

(The above story first appeared on LatestLY on May 19, 2022 10:34 AM IST. For more news and updates on politics, world, sports, entertainment and lifestyle, log on to our website latestly.com).