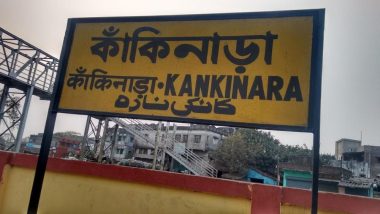 West Bengal, July 15: Miscreants hurled bombs and due to the violence that broke out in the state's Kankinara area of North 24 Pargana today, train services in the Barrackpore-Naihati division of Eastern Railway was disrupted. According to a Times Now report, as a result of the protests, 16 electric multiple units (EMU) local trains were delayed. West Bengal Violence: TMC Claims State Will Take Strict Action Against Wrongdoers in Bhatpara Incident, 'Even if They Have Backing of BJP'

The ER authorities had to cancel 20 EMUs, while two pairs of trains were short-terminated, and three Express trains were detained en route. An official quoted in the reports said The ER tried to maintain services up to Barrackpore on the Up line and up to Naihati on the Down line to reduce the harassment of the passengers during the peak hour.

Both Kankinara and Bhatpara have been witnessing extreme clashes since the declaration of the Lok Sabha Elections this year.

Following the demand of West Bengal BJP president Dilip Ghosh of a CBI inquiry into the incident in Bhatpara where two BJP workers were killed, Trinamool Congress last month stated that those involved in wrongdoing will not be spared, even if they have the backing of the BJP.

Stating that the state government will take strict action against the wrongdoers in Bhatpara incident, Trinamool Congress representative said, as quoted by ANI, "If there has been wrongdoing on anyone's part, they will have to face the consequences even though they have the backing of the BJP."

(The above story first appeared on LatestLY on Jul 15, 2019 04:18 PM IST. For more news and updates on politics, world, sports, entertainment and lifestyle, log on to our website latestly.com).