The Delhi High Court has refused to stay a notice issued by the Competition Commission of India (CCI), asking WhatsApp to furnish certain information in connection with the probe, ordered in March, on the instant messaging app's new updated privacy policy. 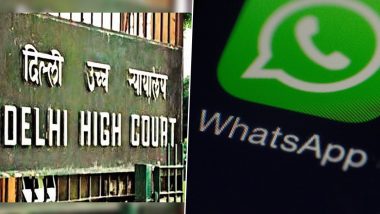 New Delhi, June 23: The Delhi High Court has refused to stay a notice issued by the Competition Commission of India (CCI), asking WhatsApp to furnish certain information in connection with the probe, ordered in March, on the instant messaging app's new updated privacy policy.

A vacation bench of Justices Anup J. Bhambhani and Jasmeet Singh said, "We do not consider it appropriate to stay the operation of impugned notice dated June 4, 2021 at this stage."  Facebook, WhatsApp Urge Delhi High Court to Stay CCI Notice in Privacy Policy Matter

The bench noted that Additional Solicitor General Aman Lekhi has "fairly" stated June 4, notice was perfectly in line with the procedure contemplated under the statute for taking forward an on-going investigation.

The bench said: "The notice has not been stayed by the division bench, and it would take substantial time for preparation of a report pursuant to the receipt of the information called-for by way of the impugned notice; which report would thereafter be forwarded to the Competition Commission of India (CCI)".

In January, the CCI had on its own decided to look into WhatsApp's new privacy policy on the basis of news reports.

Lekhi submitted that preparation of the report would not be completed at least before the next date of hearing before the roster division bench on July 9. "Taking note of Lekhi's statement we would only urge the DG (Director General, Competition Commission of India) to bear in mind that investigation against the appellant is under judicial consideration before a Division Bench of this court; and we direct that the matter be listed before the Roster Division Bench on 09.07.2021," said the court.

Facebook and WhatsApp challenged an order passed by single judge in April dismissing their pleas against the probe. In their fresh applications on Monday, the companies had urged the High Court to stay CCI's June 4 notice asking them to furnish certain information during the probe ordered by it into the instant messaging app's new privacy policy.

Senior advocates Harish Salve and Mukul Rohatgi, representing WhatsApp and Facebook, had sought stay on the notice on the grounds that the last date to respond was on Monday itself. Salve had submitted the privacy policy was already under challenge in the Supreme Court, and the Delhi High Court and the anti-trust regulator should not have intervened in the matter.

Salve had submitted that 'in view of the DG's demand for information within 15 days of receipt of notice on pain of penalty, it is clear the DG's effort is to take precipitate action against the appellant, without awaiting a decision of the pending issues by the division bench, is an act of overreach of the judicial process, which deserves to be restrained'.

On March 24, the CCI had ordered a probe into the updated privacy policy of WhatsApp for breaching the antitrust law. "CCI is of prima facie opinion that the 'take-it-or-leave-it' nature of privacy policy and terms of service of WhatsApp and the information-sharing stipulations mentioned therein, merit a detailed investigation in view of the market position and market power enjoyed by WhatsApp," said the CCI order.

(The above story first appeared on LatestLY on Jun 23, 2021 04:50 PM IST. For more news and updates on politics, world, sports, entertainment and lifestyle, log on to our website latestly.com).