A Flight as Buoyant as a Leaf in the Last Season, Surveying a New Being Published Collection By the Popular and Talented Iranian Artist, Yalda Dousti

Recently, a young and gifted Iranian artist who stunned everyone with her unique talent in the art of painting, decided to publish she made a new collection of her works that will be released to the public soon. 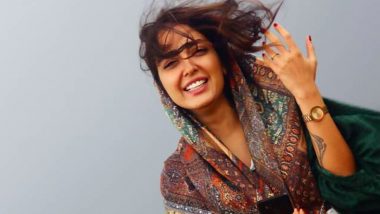 Recently, a young and gifted Iranian artist who stunned everyone with her unique talent in the art of painting, decided to publish she made a new collection of her works that will be released to the public soon.

Yalda Dousti is a master of painting and drawing, and she was born in 1371 in Iran. Actually, she was born on the last day of autumn, or in other words, the longest night of the year, which is also known as Yalda night in Iran, and for this reason, her virtuoso family named her Yalda.

Yalda, despite her great interest in painting, which accompanied her since childhood, and she had been fed and watered by that like a fountain which irrigates the roots of a man's soul and breathes life into it.

She continued her education in the field of drawing and architecture, but after a while by making a serious decision on endeavoring at painting and drawing field, she changed everything and created a new chapter in her life, a new chapter that came in one of the darkest, dumbest and hardest periods of her spiritual life and led It to give birth to a miracle that she called it the last season later.

The last season is her new collection name that she intends to show it early, which includes thirteen surreal works, that, in fact, represents the closest combination of her spiritual dimensions and her art so far.

Therefore, she has chosen the surreal style that illustrates the meaning of her works in the best impossible way.

In the words of this artist, "Suddenly after years I began to see strange abilities that came out of me, my hands know things that I had never been taught and learned, and my soul was absorbed more and more toward discovering the mysteries and glories of mysticism and theology's world and thus the last session collection emerged.

This collection expresses a girl's conditions and experiences encounter to the concepts and meanings of mysticism and theology for the first time and I have turned these immaterial and intangible experiences into images which convey that feeling well through the technique of surrealism with real subjects, and also this collection has been painted by oil painting , because it gives a more original and natural feeling among other tools and I could use this tool to let me also mention the concept behind the works."

She became interested in the subject of mysticism and theology through one of her friends, but then this fields was blended into her texture and true warp and woof by further studying and researching in them, and that was the purpose which pulled her closer to her actual origin. The last season is an example of the creature being united with his Lord And an actual aspect to watch the flow of divine love and light in the painter shell.

The works of this collection, in addition to the tenderness that it has due to its mystical feeling and full of love vibes, also express the pains and sufferings that a person takes in the captivity of life she also showed this damage uniquely through his using her blood composition on the paints. She mixed blood with resin to accompany her artworks with the pains that has faced in the life and the salvation that arise from drowning and swallowing in the fountain of God's light, and from Yalda's point of view, this feeling of salvation and trust is what which separates the last leaf from the tree on the last day of the last autumn without any worries and waits in comfort for a new chapter of his life.

But to Yalda, this buoyancy and close experience with mysticism has encouraged her to decide that publish her art to help others, and therefore she will spend 60 to 70% of the cost of selling her artworks for charity, as in painting. Her works have been able to accompany the suffering of the universe and in fact can be a mercy for the suffering of the people.