Deepak Ballaney Redefines the Art of Cooking With His Experiments With Chicken Wings and Their Sauces : Reports

Deepak Ballaney has established a trusted presence in the cooking arena. The praise of his concocted delicacies has travelled across countries as he served the Prime Minister of India, President of France and also made Bill Gates a fan of his culinary skills 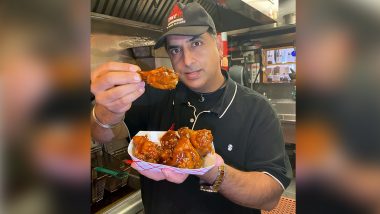 The love for chicken in the entire world is one thing nobody can compete with. Mastering the knack of creating the dish loved by the masses is a talent not many can attain. But, Deepak Ballaney, the Head Chef at New York’s renowned ‘International Wings Factory’ has not only acquired it but also made it reach the heights which leave everyone drooling for more.

The qualified chef from World’s number one, ‘The Culinary Institute of America’ has opened his restaurant in New York, which is famous for its variety of Chicken Wings, ranging from crisp and juicy to super crisp, served according to the foodie’s liking. The cooking veteran loves to experiment with his dishes as he believes that to make something phenomenal, one need to take the risk with a positive attitude.

Deepak Ballaney has established a trusted presence in the cooking arena. The praise of his concocted delicacies has travelled across countries as he served the Prime Minister of India, President of France and also made Bill Gates a fan of his culinary skills. Talking about how he reels back from any kind of setback during his work, he likes to mention just one thing, "Universe is a diversified place. You can ask anything from it and it will deliver it back to you. But, the key to that door is patience and a strong belief- that you can do it!”

Having done a chemistry major from Bombay University and working in IBM for a decent one year, Deepak never felt that he'll have the option to seek after his dream vocation in culinary expressions as his family always dreamt of him to be a doctor or an engineer. However, when he got employed as an administration learner at the world well known Taj Group of Hotels, he discovered his window of opportunity and has never looked back ever since.

Deepak envisions opening his dream restaurant in the heart of New York- The Times Square. His goal to make it big is what keeps him dedicated to his work. Staying grounded is what makes Deepak Ballaney different. He does not consider cooking as his job, rather than it is his passion which he does along the way to attaining success.