From Rubina Dilaik's ‘Shikshika style' to Rahul Vaidya's ‘hobo fashion' to a shirtless Abhinav Shukla's wannabe Salman stints, by every yardstick, this has been a season of fashion faux pas, bringing in its wake some of the shabbiest, most bizarre style statements ever seen on the show. 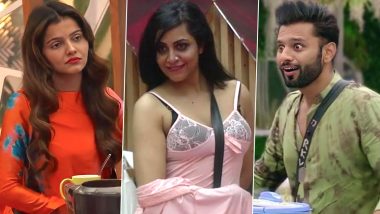 Mumbai, February 10: Among all things that call for a resounding thumbs down as far as Big Boss 14 and its housemates go is the style quotient we have seen in the house this year. By every yardstick, this has been a season of fashion faux pas, bringing in its wake some of the shabbiest, most bizarre style statements ever seen on the show.

The fact is all the more in your face if you recall how nattily Sidharth Shukla and Paras Chhabra turned out only last season. Paras, who soon enters season 14 as a supporter of Devoleena Bhattacharjee, was particularly every inch a rockstar, down to designer tracksuit. From bright shoes to exaggerated prints, he carried it all with aplomb. Bigg Boss 14: Rashami Desai, Kamya Punjabi and Others Call Abhinav Shukla’s Eviction From the Reality Show ‘Unfair’.

So far, whatever we have seen in the current season would sure make us wish Paras at least elevates the style quotient of season 14 when he enters the house, even if he fails to find a solution for the unending boredom. He could be a soothing change, at least, after the dual style onslaught of Rakhi Sawant and Arshi Khan.

Indeed, controversy queen Rakhi and evicted contestant Arshi automatically come to mind when you think of Big Boss 14 and its bad fashion.

Rakhi's sense of dressing has been as bizarre as her actions and words. She has been seen sporting some of the most eccentric colours and fits.

Neon pink overly-fitted outfit paired with a bright orange beret? Trust Rakhi to have worn such an ensemble on the show. Tight red sports bra with denims? Who else would wear it but Rakhi? One of the outfits that grabbed the audience by their eyeballs was a saree, but the reason behind the attention was that former contestant Abhinav Shukla helped drape it on her.

With Rakhi, of course, life centres on a one-point agenda -- grabbing eyeballs -- be it on or off the Big Boss cameras. It's just that after all these years the Rakhi Sawant brand of ‘bizarre' doesn't seem outrageous enough to regale anymore. Bigg Boss 14: Salman Khan’s Reality Show This Season Has Witnessed the Most Bizarre Style Statements Ever?

Then there was Arshi Khan and her nighties!

A day before she entered the house, Arshi, who was the challenger in the show, shared the stage with Bollywood superstar Salman Khan.

Her loud purple and gold ensemble seemed okay in front of the accessory she chose to pair it with. Arshi sported a skull-shaped choker neckpiece and a maang teeka, something that looked quite off-putting with the outfit she chose to wear on stage.

That was just the beginning. In the few weeks, she was on the show, Arshi made headlines not only with her explicit language but also her clothes. She can safely be called Nightie Queen of Bigg Boss 14, what with her fetish for the sleepwear at all odd hours in the house.

From satin opaque nighties to lacy robes paired with smokey eyes and thick eyelashes, Arshi tried to be the seductress before the lens. She was inadvertently spoofing all things sexy.

The other we have seen this season has been worse. To play Devil's advocate, at least Rakhi and Arshi were outrageous enough with their bizarre fashion outings to draw attention. Most of the others, like everything else they have done in the house, have looked outright boring with their sense of dressing, too.

From Rubina Dilaik's ‘Shikshika style' to Rahul Vaidya's ‘hobo fashion' to a shirtless Abhinav Shukla's wannabe Salman stints, you really can't choose who has fashionably looked the most boring housemate in a season that would easily vie for top spot if ever there was a contest for the Most Boring Bigg Boss Season Ever.

(The above story first appeared on LatestLY on Feb 10, 2021 11:01 PM IST. For more news and updates on politics, world, sports, entertainment and lifestyle, log on to our website latestly.com).