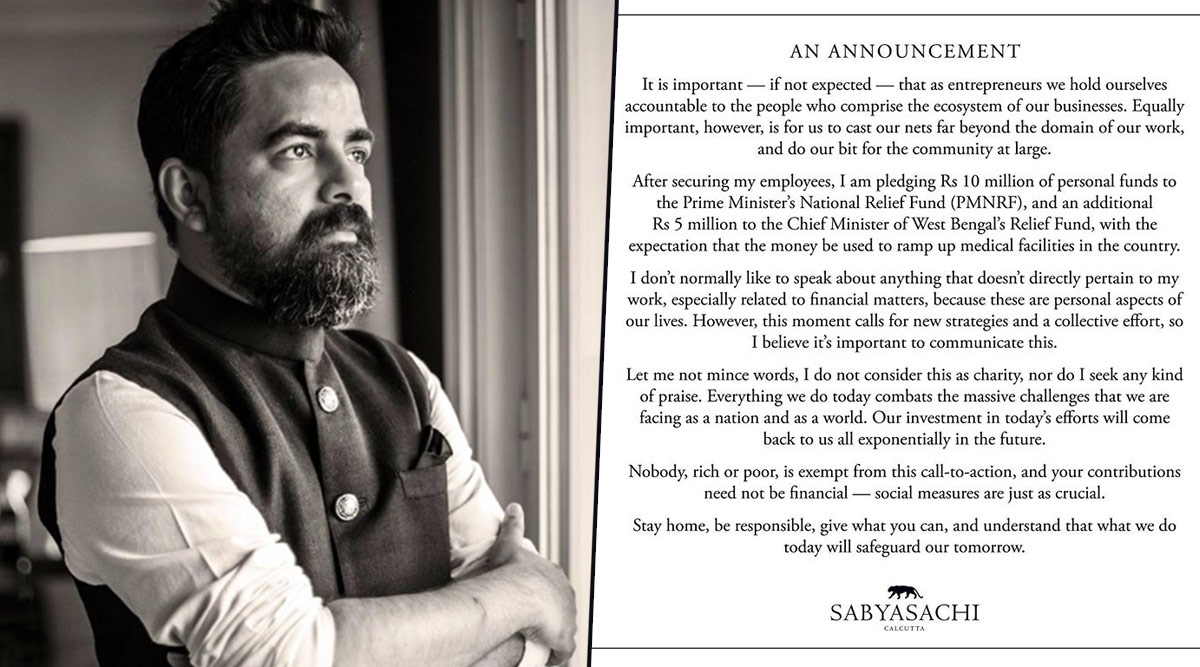 While the government is tackling the spread of COVID-19 in the country and taking necessary measures to curb its outbreak, PM is also requesting the citizens to help the government monetarily. After setting up Prime Minister's National Relief Fund, we saw names like Prabhas and Akshay Kumar donating a mighty sum for the betterment of the country's citizens. While the Baahubali actor donated a big sum of Rs 3 crore, Akshay announced a huge donation of Rs 25 crore to help people fight coronavirus. While Varun Dhawan had earlier joined the list of celebs who were willing to lend a helping hand, designer Sabyasachi Mukherjee too has pledged a donation of INR 15 Million (INR 1 crore 50 lakhs approx).

Sabyasachi in his post on Instagram informed about his decision to donate Rs 10 million to PM's National Relief Fund and an additional Rs 5 Million to West Bengal Chief Minister Relief Fund. The designer further stated that he doesn't treat this as a charity nor does he expect any praise in return. He further emphasises on how one doesn't need to extend monetary help to help curb the virus and social measures are equally helpful. He wants the government to use this money to better the medical facilities in the country. The designer has done his bit and we are super proud of his humble gesture.

Previously celebs in the South had generously donated to the Chief Minister Relief funds of Andhra Pradesh and Telangana. From Pawan Kalyan, Rajinikanth, Ram Charan, Chiranjeevi, Jr NTR, Allu Arjun, Mahesh Babu and Nithiin, all the popular faces down south had announced ample donations to help their government fight the coronavirus outbreak in the state.