Dua Lipa bagged two awards at the Brit Awards 2021 event in the UK. The singer looked sensational in a golden-yellow Vivienne Westwood Bardot mini dress. She has also shared some pictures of her on Instagram from the event. 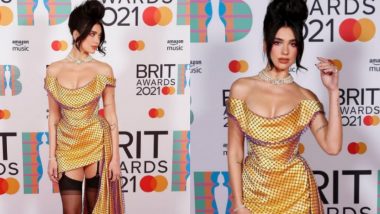 The BRIT Awards 2021 has been extra special as it is being one of the first in-person special events which took place in the UK after a while. The event operated with half of the usual capacity with no masks or social distancing; although, the attendees have been tested before and after the event. The event also witnessed the appearance of Taylor Swift, Harry Styles, Little Mix among others after after a long time, they were all dressed in glitzy attire for the event. However, popular British singer Dua Lipa’s quintessential punk attitude in a mini dress has stolen the show.

The 25-year-old singer was one of the most stylish stars on the BRIT Awards 2021 red carpet. The Future Nostalgia singer looked ultra-chic in a golden-yellow Vivienne Westwood Bardot mini dress with a neon-purple mesh overlay. She styled the dress with black stockings and platform lace-up heels. To accessorize her look, she opted for a three-row pearl choker necklace, bracelets, earrings, and rings, by Vivienne Westwood’s signature collection. The singer’s stylist Lorenzo Posocco completed her look with a beehive hairstyle like Amy Winehouse.

According to the Popsugar report, during the BRIT red carpet live streaming, while speaking with hosts Yasmin Evans and AJ Odudu about her outfit, Dua told, “I wanted to make it British, quite London, have some fun with it. It’s all about getting people together.” Well, we do agree with Dua! The singer bagged two awards-one for Best Female Solo Artist and another for Best British Album, Future Nostalgia.

Now, Dua Lipa has taken to her Instagram handle to share a few stunning pictures of her in a golden-yellow Vivienne Westwood Bardot mini dress at BRIT Awards 2021 event. While sharing the same, she wrote, “BEST ALBUM - FUTURE NOSTALGIA & BEST BRITISH FEMALE THANK YOU TO MY FANS THIS IS ALL YOU!!!!! @brits (SIC).”

Earlier in the evening, Dua Lipa donned another outfit from British fashion designer Vivienne Westwood’s collection and graced the stage of BRIT Awards 2021 with a medley performance.

(The above story first appeared on LatestLY on May 12, 2021 05:54 PM IST. For more news and updates on politics, world, sports, entertainment and lifestyle, log on to our website latestly.com).