Georgina Rodriguez Gives Major Denim-on-Denim Style Lessons as She Sizzles Instagram on Her Trip to Paris! View HOT Pic of the Curvy Bombshell

Denim-on-denim has been one of the most popular fashion trends and equally tricky as well. There is no one way to go about the denim-on-denim style BUT if you are looking for one, Georgina Rodríguez is here to give you major denim-on-denim fashion lessons. 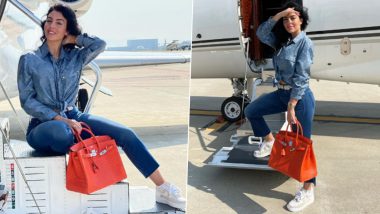 Denim-on-denim has been one of the most popular fashion trends and equally tricky as well. There is no one way to go about the denim-on-denim style BUT if you are looking for one, Georgina Rodríguez is here to give you major denim-on-denim fashion lessons. The super HOT model showed up next to Cristiano Ronaldo's private jet on the trip to Paris. Georgina Rodríguez shared amazing pics on Instagram to account. It looks like Cristiano Ronaldo's girlfriend can be seen on her way to Paris as she shared images next to the Portuguese international's private jet.

Ronaldo and Georgina recently shared some amazing pics from Dubai as well making everyone fall in love with the couple.  Georgina could be seen soaking up some vitamin D as she hit the Dubai beach. She was captured enjoying jet skiing as well.  Georgina and Ronaldo have two-year-old daughter Alana together and are raising his other three children - surrogate twins Eva and Mateo, three, and ten-year-old Cristiano Jr.

In the images, you can totally see Rodríguez donning some million-dollar accessories like the Patek Philippe watch, set with small diamonds, worth 50 thousand euros; and the Birkin bag from Hermès, the exclusive model of which can be purchased, on request, for more than 37 thousand euros.

Georgina Rodríguez Sports Denim-on-Denim Look for the Trip to Paris:

The super sexy girlfriend of Juventus' star forward, Cristiano Ronaldo is extremely popular on Instagram boasts of an Instagram followers of 23.8 million people which is only growing. She has also shared many romantic couple pics with Cristiano Ronaldo and adorable family vacation photos as well and they are as amazing as her solos.

The Buenos Aires-born Georgina rose to celebrity status on social media after she began dating Ronaldo in 2016. She gave birth to a daughter, Alana Martina, the couple’s first child in 2017. Georgina Rodriguez is also the mother figure to Cristiano’s other kids - Cristiano Ronaldo Jr.

(The above story first appeared on LatestLY on Apr 28, 2021 02:21 PM IST. For more news and updates on politics, world, sports, entertainment and lifestyle, log on to our website latestly.com).