Katrina Kaif Shares Stunning Pictures of Herself in a White Gown With a Thigh-High Slit in a Beach! (View Pics and Video)

Fans have been eagerly waiting to see Katrina back in action and the Rohit Shetty directorial seems to be a perfect treat for the audience on Diwali. She will be seen reuniting with Akshay Kumar onscreen after a long time. Sooryavanshi is Rohit Shetty's ambitious project that brings alive his cop universe. 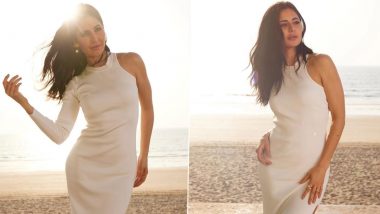 Katrina Kaif has been keeping busy with the promotions of her Diwali extravaganza 'Sooryavanshi'. Amidst her busy schedule, the actress took to Instagram to share her pictures and reels on Instagram. In two separate posts, the actress can be seen basking in the warm sun wearing a white gown with a thigh-high slit and open tresses. Katrina Kaif Does Intense Burpee Exercises, Shares Video on Her Instagram And It Is Giving Major Fitness Goals!

While she captioned the pictures, "??day ?? #sooryavanshi" she also shared an Insta reel with the caption, "A day at the beach ?? #sooryavanshi". As expected, the Gram erupted with her fans being overjoyed after finding her back in the spotlight as they showered praises on her. Katrina Kaif Workout in Spite of Her Toe Injury: Watch Her Fly in Aerial Pilates Exercise Video.

One fan commented, "You look like an angel in white ????????" It's not just the fans, the actress even left her industry friends stunned with the gorgeous pictures. While her 'Zero' co-star Anushka Sharma commented, "Beauty", Ranveer Singh who has a cameo appearance in 'Sooryavanshi', commented, "Servinnnn" on her photos.

Fans have been eagerly waiting to see Katrina back in action and the Rohit Shetty directorial seems to be a perfect treat for the audience on Diwali. She will be seen reuniting with Akshay Kumar onscreen after a long time. 'Sooryavanshi is Rohit Shetty's ambitious project that brings alive his cop universe. The film has been running in troubled waters as its release has been postponed multiple times because of the pandemic as it led to the shutdown of theatres across the country.

However, things look bright for the film as it's set to hit the screens on November 5 and satiate the audience's taste buds for a proper commercial potboiler, this Diwali. Following the Maharashtra government's lifting of civil restrictions and allowing the opening of theatres, the makers of the film made an announcement about its theatrical release through a special video.

The video which has been shot inside a cinema hall features Akshay Kumar, Ajay Devgn and Ranveer Singh together. The three actors reminisced how the cinema halls have been witness to countless emotions and how nobody knew that like our films, we too will have an interval in our lives. They go onto say that the dreary days are behind us as we look upto a new dawn and hope that this is the beginning of the end of the pandemic. The three actors urged the audience to come and watch the film in theatres and help the film industry to return to its glory.

(The above story first appeared on LatestLY on Oct 18, 2021 07:04 PM IST. For more news and updates on politics, world, sports, entertainment and lifestyle, log on to our website latestly.com).