Millie Bobby Brown Birthday: 5 Stylish Pictures of The Stranger Things' Actress That Prove She Loves to Style Coats Into Her Looks (View Pics)

But apart from her acting, many are also a fan of her fashion sense. Millie is always seen wearing trendy clothes and never fails to make heads turn with her gorgeous red carpet appearances. 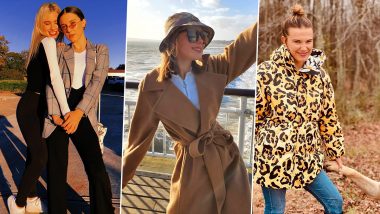 Millie Bobby Brown needs no introductions. She rose to the fame with her role as Eleven in the first season of Netflix science fiction series Stranger Things and became a household name soon enough. The show has been renewed for the third season and fans are excited to see Millie reprise the role again. The actress bagged the Primetime Emmy Award nominations for Outstanding Supporting Actress in a Drama Series in 2016 and went on to star in and produced the mystery film, Enola Holmes. She was also a part of Godzilla: King of the Monsters. Did Millie Bobby Brown ‘Fake’ Her Skincare Routine (à la Kylie Jenner) With Florence by Mills Products As Alleged by Fans? You Decide!

But apart from her acting, many are also a fan of her fashion sense. Millie is always seen wearing trendy clothes and never fails to make heads turn with her gorgeous red carpet appearances. The actress knows how to carry any look and we often see her step out of her comfort zone and experiment with her looks. Today as Brown is celebrating her 17th birthday, we decided to talk about her style. she is fond of coats and these pictures prove that she rocks that look like a boss: The Girls I've Been: Millie Bobby Brown to Star As the Lead in Upcoming Netflix Series Based on Tess Sharpe's Novel.

Check Out The Looks Below:

Millie accentuated a basic white and black outfit with a checkered jacket. The jacket added extra glam to her style and made her look classy.

If you are looking to amp up your basic look, just add a jacket to your sweat pants and t-shirt look just like Millie. And oh, dont forget the sunglasses!

This look of Millie's is simply pretty. She paired a polka dot outfit with a denim jacket and looks absolutely cool in it. The cap and the tinted glasses added more drama to her look.

If you want to look effortlessly chic the own a coat like Mille's. Pairing a brown coat over a white top is a perfect combination and it surely works for the actress. She accessorised the look with big sunglasses, the Louis Vuitton bag and the hat, giving it a suave touch.

Who doesn't love a little aminal print. Millie Bobby Brown look exceptionally adorable in this look. She paired a basic pair of jeans with a cheetah-printed coat in these pictures. This is one of those looks where you dont need to put much efforts but still can manage to look stunning.

Millie Bobby Brown sure knows what outfit looks good on her and we love how she always inspires her fans to try out new looks. We hope to see more and more of her gorgeous looks in the coming years. Join us in wishing the actress a very happy 17th birthday.

(The above story first appeared on LatestLY on Feb 19, 2021 04:29 PM IST. For more news and updates on politics, world, sports, entertainment and lifestyle, log on to our website latestly.com).