Shivangi Joshi’s Style File: 5 Cues You Can Take From The Yeh Rishta Kya Kehlata Hai Actress to Up Your Fashion Game

Yeh Rishta Kya Kehlata Hai actress Shivangi Joshi is celebrating her 26th birthday on Tuesday. Apart from her acting skills, the birthday girl is also known for her sartorial choices. You can easily take cues from the actress to up your fashion game. 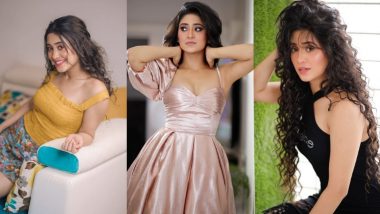 Television actress Shivangi Joshi has turned a year older today. She is celebrating her 26th birthday on May 18, 2021. Shivangi’s fans and loved ones are pouring in birthday wishes for her on social media. Shivangi Joshi is a popular face on Indian television now. She came into the limelight after she joined the star cast of Yeh Rishta Kya Kehlata Hai. Initially, she portrayed the role of Naira Singhania, and currently, she is essaying the role of boxer Sairat. Shivangi has started off early and has made a name for herself in the television industry.

The 26-year-old actress is extremely popular now; people love her for her brilliant acting skills. She has managed to win millions of hearts in no time. Shivangi enjoys a massive fan following on social media as she often shares her stunning pictures and videos to keep her fans updated and entertained. Apart from acting on TV, she is also known for her fashion and personal style. Undoubtedly, she is a true fashionista. Be it casual, party, or traditional wear; the actress can carry all of it effortlessly. Interestingly, Shivangi never fails to give us serious fashion goals. One can always take a cue from the Yeh Rishta Kya Kehlata Hai actress to up your fashion game.

On the work front, Shivangi Joshi can be currently seen in Yeh Rishta Kya Kehlata Hai and Mann Kee Awaaz Pratigya 2. In 2013, the actress made her TV debut with Khelti Hai Zindagi Aankh Micholi. Shivangi has been part of several popular TV shows; she also made her debut at the Cannes Film Festival in 2020 with a film titled Our Own Sky.

(The above story first appeared on LatestLY on May 18, 2021 10:55 AM IST. For more news and updates on politics, world, sports, entertainment and lifestyle, log on to our website latestly.com).