Shivangi earlier took to her Twitter account to share details of her new video song with co-star Mohsin Khan. She shared a BTS picture from their shooting day and captioned it saying, "Music video releasing soon". 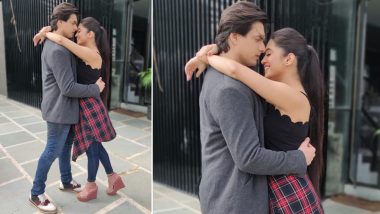 There's good news in store for all Yeh Rishta Kya Kehlata Hai fans as the show's lead pair, Shivangi Joshi and Mohsin Khan have shot for a special video. The couple will collaborate for a new music single and more details of which will be shared by them very soon. While their chemistry is already a major highlight of the show, you can expect them to weave similar magic with their upcoming single. Begusarai actor Rajesh Kareer Pleads for Financial Help, Co-star Shivangi Joshi Transfers Rs 10,000 into His Bank Account.

Shivangi earlier took to her Twitter account to share details of her new video song with co-star Mohsin Khan. She shared a BTS picture from their shooting day and captioned it saying, "Music video releasing soon." We hope soon means next week and not beyond that for we won't be able to control our excitement. Music singles are a big rage among the artists and listeners currently. With so many new videos coming out every day, it's becoming more like an obsession and we have no qualms about it. ‘Shivangi Joshi Is Always Open To Challenges as An Actor’ – Yeh Rishta Kya Kehlata Hai Producer Rajan Shahi All Praises For His Leading Lady.

The crew of Yeh Rishta Kya Kehlata Hai recently started shooting for the new episodes after shutting down the production for the past couple of months. They are following all the new safety guidelines and security protocols. While there were reports about Shivangi quitting the show, she refuted them by announcing her double role instead. Now, that's the way you shut down a rumour!

(The above story first appeared on LatestLY on Jul 31, 2020 09:36 PM IST. For more news and updates on politics, world, sports, entertainment and lifestyle, log on to our website latestly.com).