Sharddha opted for an elegant mustard saree for the event. Customised by designer Arpita Mehta. The saree was a camel twig print classic saree. 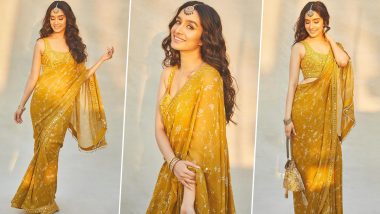 Shraddha Kapoor's fashion game is very strong and when it comes to ethnic wear, we think the actress's wardrobe has always been noteworthy. Sharddha is one of the few actresses who doesn't go overboardBaaghi with her outfits and still manages to stun everyone with her classic choices. The Stree actress decked up for her cousin Priyaank Sharma's engagement and was gleaming like sunshine in the photos that she shared online. Shraddha Kapoor Turns 31: Birthday Girl is Bollywood's Fashion Icon Whose Style Statement is Easy to Create.

Sharddha opted for an elegant mustard saree for the event. Customised by designer Arpita Mehta. The saree was a camel twig print classic saree which the actress paired with a self linear embroidered blouse. the saree had work with silver on it and tassels on the pallu. The sleeveless blouse had a similar work on it as well. Sharddha smiled as the camera captured her beautiful smile under the sun.

For her hair and makeup, the actress opted for a wavy hair look while kept her makeup to minimal. She opted for a nude lipstick while applied golden eyeshadow. Matt base and a lot of highlighter accentuated her features. Shraddha also added golden bangles, and a chunky golden maang tika with sapphire stones to go with her look. Sharddha carried a potli bag with the saree to add a little more class to her look.

Talking about Shraddha Kapoor's cousin, Priyaank Sharma, he recently got engaged to his longtime girlfriend and Karim Morani’s daughter Shaza Morani. Videos from the event surfaced online where we could see Shraddha grooving with joy along with Sonakshi Sinha. Shraddha brother Siddhanth Kapoor, who had tested positive for Covid-19 earlier, was also seen enjoying the grand celebration. Shraddha Kapoor in a Black Puffer Jacket and Thigh-High Boots Is Giving Total Thanksgiving Feels!

On the work front, Shraddha Kapoor was last seen alongside Varun Dhawan and Nora Fatehi in Street Dancer. She was also a part of Tiger Shroff starter Baaghi 3. She will now be seen in Vishal Furia’s Naagin and also has Luv Ranjan's next in her kitty. Shraddha will be seen sharing screen space with Ranbir Kapoor in this film.

(The above story first appeared on LatestLY on Dec 26, 2020 06:44 PM IST. For more news and updates on politics, world, sports, entertainment and lifestyle, log on to our website latestly.com).