When it comes to fashion, Shweta Tiwari surely knows how to turn millions of heads. She is a true fashionista. Currently, she is in Cape Town and she has shared a gorgeous picture of her in a pink floral printed saree. She is looking extremely beautiful in the same. 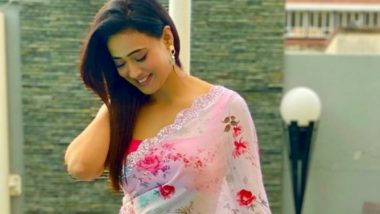 Popular television actress Shweta Tiwari has proved the famous phrase - "Age is just a number" right several times. She is one of the most fashionable actresses in the television industry.  The mother of two definitely knows how to keep her fans hooked with her gorgeous looks. The actress enjoys a massive fan following on social media. She often shares stunning pictures and videos of her on her official Instagram handle. Currently, the actress is in Cape Town as she is shooting for Khatron Ke Khiladi 11.

Shweta has been sharing several pictures of her from the shooting location. Recently, she has taken to the photo-sharing app to share an ultra-gorgeous picture of her wherein she can be seen wearing a light pink floral printed saree with shimmery border and she is exuding elegance in the same. She has paired the beautiful saree with a pink sleeveless blouse. To complete her look, she opted for minimal makeup, wore earrings, and kept her tresses open.

Soon after she posted the same, several fans started pouring in heart emojis on the comments section. One fan wrote, "U look so cute Every time," while another one wrote, "U r the sweetest one in the world.”

Earlier, the 40-year-old actress shared a picture of her from Cape Town wherein she can be seen wearing denim shorts paired with a pink top. TV actor Arjun Bijlani, who is also a participant of Khatron Ke Khiladi 11, clicked the picture of Shweta. Take a look:

(The above story first appeared on LatestLY on May 21, 2021 10:19 AM IST. For more news and updates on politics, world, sports, entertainment and lifestyle, log on to our website latestly.com).