Sonam Kapoor and Anil Kapoor Are All Smiles in Their Latest Airport Pics, Are They Set For Cannes 2019? 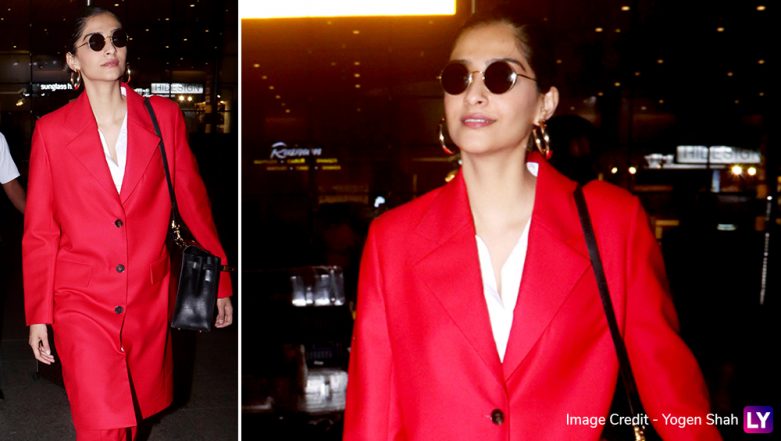 Cannes Film Festival 2019 is just a few days away. Like always the buzz about this fashionable cinema event is high. This time too, Twitterati is glued to their feeds with their squinted eyes to see who wears what. Sonam Kapoor, Aishwarya Rai Bachchan, Deepika Padukone have been the most-discussed about Bollywood actresses at Cannes. While we don't know about the latter two yet, Mrs Sonam K Ahuja has already left for French Riviera, we assume. Travel Tip of The Week: How to Reach Cannes, Best Time to Visit and Other Tips to Explore the French Riviera City.

The actress was spotted at Mumbai airport with her handsome dad, actor, Anil Kapoor. She wore a bright red oversized semi-formal suit and was all smiles for the paparazzi. Of course, why wouldn't she? After all, this is one event that she always owns like a queen.  On the other hand, AK was grinning ear to ear. He looked stylish as ever in a black sweatshirt paired with black trousers. Check out the awesome pics here.

On the filmy front, Sonam was last seen in Ek Ladki Ko Dekha Toh Aisa Laga, which also starred Anil Kapoor. Next in line for her is 'The Zoya Factor' that stars Malayalam heartthrob, Dulquer Salmaan. For now, the fans are more interested in her looks at the celebrated film festival. Stay tuned with us for more updates on the fest.