Television actress Tinaa Dattaa celebrates her 34th birthday on November 27, 2020, and on this occasion we thought of bringing to your light some of her style gems straight from Instagram. Have a look. 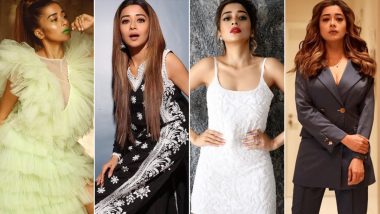 Television actress Tinaa Dattaa is majorly known for her portrayal of Ichchha as well as Meethi in Colors iconic serial Uttaran. She literally ruled the Television space during her time and still happens to be audiences favourite. While a lot has been written about her daily soap and acting, little do people mention about her style evolution. Over the years, there has been a drastic change in her fashion choices and we are totally impressed. Currently, the actress enjoys 2.4 million followers on Instagram and occasionally posts some stylish photos of hers that are bound to make you say supreme. Tinaa Datta Goes Bold and Badass: Posing with Nude Model to Rocking Thigh-High Slit Gown, Uttaran Actress Does it All.

And as the beauty celebrates her birthday on November 27, 2020, we thought of lauding her fashion sense that’ll surely mesmerise you. Be it a six-yard, salwar-suit or something modern as well as edgy, Tinaa’s IG has superhit written all over it. So, without further ado, let’s begin the style tour. Have a look. Bigg Boss 14: Tinaa Dattaa Denies Being Part Of Salman Khan’s Show, Clarifies Participation Rumours With This ‘Love Letter To Bigg Boss’.

Tinaa In A Ruffle Themed Outfit And Boy That Daring Lip Shade!

The Actress Slaying It In A Black and White Patterned Sharara Set!

Dattaa Looking Gorg In A Saree With Hint Of Sparkles... Just Wow!

A White Mini To Flaunt Those Sexy Legs!

She’s Giving Quite A Boss Lady Vibe In This Hot Pantsuit!

Floral Separates That Needs To Be Part Of Your Wardrobe Now!

Let’s End This On A Stylish Striking Note!

That’s it, guys! The best thing about Tinaa’s closet is that they are in-trend, wearable and very much feminine. A look at the above pics and you’ll get an idea on how the TV babe loves to play with different colours and outfits. All in all, 'fabulous fashion' is the word. Happy 34th. Stay tuned!

(The above story first appeared on LatestLY on Nov 27, 2020 09:40 AM IST. For more news and updates on politics, world, sports, entertainment and lifestyle, log on to our website latestly.com).