Akshaya Tritiya 2019: Sale of Gold Witnesses Phenomenal Spike, Sales Up By Over 25% 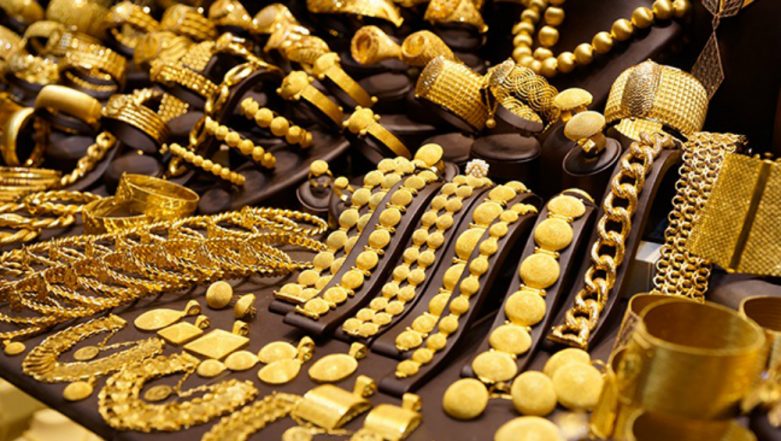 Mumbai/New Delhi, May 7: Jewellers reported better footfalls on the auspicious day of Akshaya Tritiya Tuesday with many reporting up to 25 per cent sales volume over the previous year.

Lower retail prices of gold, and the marriage season boosted consumer sentiment in spite of the day being a working day, industry sources told PTI.

The past many years had been bad for the sector as demonetisation and GST were big put-downers and this is the first Akshaya Tritiya since 2016 that is showing some visible volume uptick.

"Footfalls are good as there is a positive sentiment. Despite being a working day and the sweltering heat, there has been steady stream of people coming in to pick up pre- booked jewellery and also some token items from the morning. But the momentum gathered more steam after office hours and we expect more pick in the volume through the rest of the night," said Saurabh Gadgil, national vice-president of the India Bullion & Jewellers Association and chairman of the city-based PN Gadgil Jewellers. He said, as Akshaya Tritiya is more about light weight jewellery, the offtake is more on wearable items, gold and silver coins and wedding jewellery.

"We are very positive and are expecting around 25 per cent volume growth over last year," he added.

All-India Gems & Jewellery Domestic Council chairman Anantha Padmanabhan said, the industry is getting very positive reports from across the county.

"We are receiving very encouraging reports on high footfalls and the momentum started picking up from the evening, being a working day and also due to the heat wave conditions during the day.

"The Southern region has done extremely well, followed by the North. Due to the long wedding season, gold and jewellery sales have been encouraging so far this year. Customers are also benefiting from low prices," he said. Kalyan Jewellers chairman TS Kalyanaraman said sales have been, thanks to the stable prices and positive sentiments.

There are many more auspicious wedding days in 2019 as opposed to last year and families prefer to initiate their wedding purchases on Akshaya Tritiya, so there was also a traction with our wedding line too, he said.

"In the metros, we have had more young first-time buyers making token purchases, while in non-metros the sentiment continues to be positive. The Southern markets have done well with Kerala and Karnataka taking the lead. Delhi, Punjab, Rajasthan and MP have also responded well," he said.

Tanishq senior vice-president for sales & marketing Sandeep Kulhalli said they got healthy double-digits volume spike compared to last year and expect volumes to grow further over the rest of the hours.

"This year we started seeing footfall from the moment we opened the stores. People are buying jewellery and coins and are coming with a pre-decided needs. Our sales are up 20 percent," he added.

Anmol founder Ishu Datwani said, the sales graph is on an uptrend and the sentiment has been good since Gudi Padwa.

"Footfalls have been good since morning and there has been a good demand for small and big-ticket items especially in diamond jewellery and even wedding jewellery. We are expecting 25 percent increase in sales today," he added.

UT Zaverys Kumar Jain said this particular muhurat on the Akshya Tritiya comes after 17 long years so people want to take advantage of it.

"Mostly people are coming to pick up their pre- booked wedding jewellery. However, may are also coming in to buy token items for the day. As polling is over and there is free movement of bullion now. We expect 25 percent sales growth," he added.

Kundan group director Vidit Garg said, their volume has increased by around 40 percent till 4 pm. Bullion trader Khanna Gems Pankaj Khanna said their volume rose 20 percent in offline bullion demand while had over 1,200 transactions for gold and silver coins online."