Asom Divas 2022 Date: Know History And Significance Of The Day That Celebrates The Arrival Of Chaolung Sukaphaa In Assam

According to Ahom tradition, Sukaphaa was a descendant of the god Khunlung, who had come down from the heavens and had ruled Mong-Ri-Mong-Ram. Sukaphaa brought a divine diamond chum-Phra-rung-sheng-mung in a box, a divine tusked elephant, a divine chicken Kaichengmung, a divine embroidered cloth, a divine pair of drums, and a divine sword Hengdan. 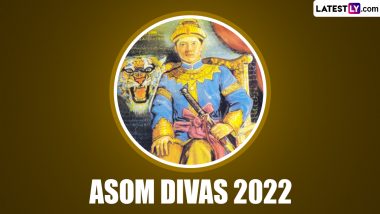 Asom Divas is celebrated annually by the people of Assam on December 2. Asom Divas, also known as Sukaphaa Divas, is a regional public holiday in the state. This holiday commemorates the arrival of the first king of the Ahom kingdom in Assam in the early 13th century. December 2 has been a public holiday in Assam since 1996. Sukapha's reign established the Ahom Kingdom that would rule medieval Assam for the next six hundred years, famously resisting other great powers such as the Mughals. Kati Bihu 2022 Date in Assam: Know All About the Significance, History and Ways To Observe the Harvest Festival of Kongali Bihu.

According to Ahom tradition, Sukaphaa was a descendant of the god Khunlung, who had come down from the heavens and had ruled Mong-Ri-Mong-Ram. Sukaphaa brought a divine diamond chum-Phra-rung-sheng-mung in a box, a divine tusked elephant, a divine chicken Kaichengmung, a divine embroidered cloth, a divine pair of drums, and a divine sword Hengdan.

The Ahom dynasty was established by Chaolung Sukaphaa, a prince from the Tai state of Mong Mao, close to present-day Ruili in Yunnan, China. Sukaphaa is revered for being a strong, courageous leader. He played a vital role in unifying the various indigenous ethnic groups of Assam. December 2 has been celebrated as the Sukaphaa Divox, or Axom Divox (Assam Day) in Assam since 1996. Bohag Bihu 2022 Date in Assam: When Is Rongali Bihu?

Sukaphaa’s contribution to the local tribes has been remembered in the history of Assam. He put in place conciliatory measures to unite all the indigenous people, treating them all equally, and also encouraged intermarriage between the Ahoms and other tribes. As per historical records, after the birth of a cousin blocked his path to the throne, he left Mong Mao and arrived in Namrup, in the southeast of Assam in 1228.

The period of Ahom rule is seen as a glorious chapter in the history of Assam. The date of his arrival is usually accepted as the founding date of the Ahom Kingdom. It is believed that the Ahom dynasty founder is believed to have left Maulang in the year 1215 with over 9,000 people and wandered around for years. He later settled in Upper Assam’s Charaideo in the year 1235.

In Assam, December 2 is celebrated as the Sukaphaa Divas or Asom Divas. An award is given by the State government that day to a prominent personality. This day is dedicated to honouring his legacy. The celebration begins with beautiful folk music and several indigenous dances like Bagurumba, Bihu dance, and Bhortal dance performed by local artists. An award ceremony follows, as well as a grand procession organised by the authorities.

(The above story first appeared on LatestLY on Dec 01, 2022 01:00 PM IST. For more news and updates on politics, world, sports, entertainment and lifestyle, log on to our website latestly.com).