Chinese Language Day 2022 Date, History And Significance: Everything You Need To Know About the Global Observance

Chinese Language Day 2022 will be observed on Wednesday, 20th of April. The annual event celebrates Cangjie, who invented Chinese characters about 5,000 years ago. To know more about the occasion, continue reading. 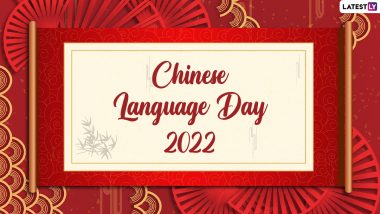 The Chinese language has archaeological records that point back to at least 4,000 years and is now spoken by more than a billion people. To celebrate the culture and history of the complicated yet beautiful language, Chinese Language Day is marked, every year in the month of April.  The annual observance promotes and commemorates the Chinese literature, poetry, and language to the world tradition. The first Chinese Language Day was celebrated in the year 2010 on the 12th of November. Now the date has been changed according to the Chinese Calendar. Chinese Language Day 2022 will be observed on Wednesday, 20th of April. The day is not an official holiday and hence businesses, educational institutions and shops will be opened. April 2022 Holiday Calendar With Major Indian Festivals and Events: Chaitra Navratri, Ramadan, Good Friday; Check List of All Important Dates and Bank Holidays for the Month.

In 2010, the UN Department of Public Information (DPI) initiated individual days for the six official languages that are English, French, Arabic, Chinese, Russian and Spanish. The idea behind the initiative was to widen the awareness of different lingos and to promote multilingualism and cultural diversity in the world. Thence, April 20th was chosen as the date for the Chinese language. The day also pays tribute to Cangjie, who was a prominent figure in ancient China. Cangjie claimed to be an official historian of the Yellow Emperor and the inventor of Chinese characters. Furthermore, the date also marks Guyu, which is the 6th solar term in the traditional Chinese calendar.

For informational purposes, standard Mandarin is the dialect taught in Chinese academic institutions and is often used in local media broadcasts. Whereas, Cantonese is used in Hong Kong and Macau as well as the Guangdong province and other areas of Southern China. To celebrate the day, schools and colleges organize workshops and exhibitions for people who are interested in learning new languages. Concerts featuring Chinese artists, martial arts performances, seminars, and calligraphy exhibitions are held to spread the importance of the language.

(The above story first appeared on LatestLY on Apr 21, 2022 07:39 AM IST. For more news and updates on politics, world, sports, entertainment and lifestyle, log on to our website latestly.com).