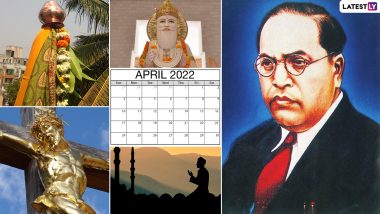 The fourth month of the Gregorian calendar, with 30 days, April is filled to overflowing with a plethora of Festivals, National Days, and New Year events. The month brings about flourishing greenery with itself. April commemorates century-old rituals of different regions as folks enjoy major Indian festivals during the month. April welcomes the harvest season with the country basking in the afterglow of winters, flowers blooming, there is a perfect cultural vibe check. The first week of the month is all about new beginnings with 2nd April being New Year's Day for many communities. Maharashtrians and Konkanis will observe Gudi Padwa, which is the first day of the New Year on the same date. Along with this, the first Saturday of the month will also mark the first day of the New Year for the state of Andhra Pradesh, Telangana, and Karnataka which is known as Ugadi. On the same date, the Sindhi community will celebrate the birth anniversary of their patron saint Jhulelal which is also the first day of New Year for them known as Cheti Chand.

The holy month of Ramadan for Muslims and the auspicious nine-day festival of Chaitra Navratri will also commence from April 2. Followed by this we have another significant Hindu festival which is the birth anniversary of Lord Ram. This year, Ram Navami falls on Sunday, April 10. The month also celebrates the birthday of the father of the Indian Constitution, Bhimrao Ramji Ambedkar. Bhimrao Ramji Ambedkar Jayanti will be observed on Thursday, 14th April. Then we have Good Friday, on 15th April which is a Christian holiday commemorating the crucifixion of Jesus. Let's have a look at all of them in a clear way so you can plan your holidays accordingly.

Except for Meghalaya and Himachal Pradesh, Banks will be closed in all the states

Banks will be closed except in Rajasthan, Jammu and Srinagar

The above-mentioned bank holidays will be in addition to the regular bank holidays, i.e., 2nd and 4th Saturdays of a month. Moreover, there are many International and national observances that will be observed in the month of April. Like National Civil Service Day, World Veterinary Day World Malaria Day, and many more.

(The above story first appeared on LatestLY on Mar 28, 2022 12:36 PM IST. For more news and updates on politics, world, sports, entertainment and lifestyle, log on to our website latestly.com).