Cow Appreciation Day 2020: 10 Interesting Facts About The Farm Animal That Are A-MOO-SING! 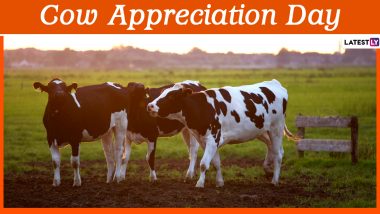 Did you know today is Cow Appreciation Day 2020? Marked annually on the second Tuesday in July, this observance is to raise awareness about the cattle animal and appreciate them, pretty much as the name makes it clear. And to celebrate this day, a lot of people even dress up like cows! We all know how important milk is in our lives and the byproducts we consume of it every day. It was started by Chik-Fil-A, a chicken sandwich company. They made a story to encourage people to come and eat a sandwich at their place instead. But the fun observance aside, we have got you some interesting facts about cows which will surely a'moo'se you, get it?

Did you know any of these interesting facts about the cattle animals? On Cow Appreciation Day, do share them with your friends and family.

(The above story first appeared on LatestLY on Jul 14, 2020 08:00 AM IST. For more news and updates on politics, world, sports, entertainment and lifestyle, log on to our website latestly.com).