Gita Jayanti 2022 Date: Know History and Significance of Gita Mahotsav and Chapters of The Bhagavad Gita on Its 5,159th Anniversary

This day is celebrated as the birth of the Bhagavad Gita. According to Drik Panchang, this year, people will celebrate the 5,159th Anniversary of the sacred book. Gita Jayanti is observed on Ekadashi tithi (11th day) of Shukla Paksha in the month of Margashirsha. This year, Gita Jayanti 2022 will be observed on Mokshada Ekadashi which falls on November 3, 2022. 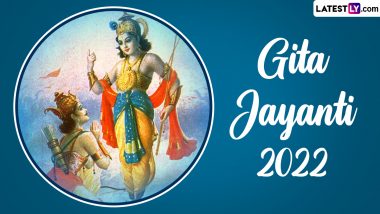 Gita Jayanti is a very auspicious and important day for people of the Hindu community. On this day, the holy book of Hindus, Bhagavad Gita, was narrated by Lord Krishna himself to Arjuna. This day is hence celebrated as the birth of the Bhagavad Gita. According to Drik Panchang, this year, people will celebrate the 5,159th Anniversary of the sacred book. Gita Jayanti is observed on Ekadashi tithi (11th day) of Shukla Paksha in the month of Margashirsha. This year, Gita Jayanti 2022 will be observed on Mokshada Ekadashi which falls on December 3, 2022. Mokshada Ekadashi 2022 Date & Significance: Know Vrat Katha, Parana Time for Breaking Fast and How To Observe Guruvayur Ekadashi Vrat.

History of Bhagavad Gita And Why The Day Is Celebrated

The Bhagavad Gita is a 700-verse Hindu scripture that is part of the epic Mahabharata dated to the second half of the first millennium BCE. It is considered to be one of the holy scriptures of Hinduism. The Gita is set in a narrative framework of a dialogue between Arjuna and Krishna. The history of the Gita dates back to 5,159 years. It was written by Veda Vyas. It is narrated in Dwapar Yuga by Lord Krishna to Arjuna at the battlefield of Kurukshetra. Kurukshetra, which is now in Haryana, is the holy place of Hindus. In the Gita, it is stated that when Lord Krishna was narrating the contents of the Gita to Arjuna to come back from Kurukshetra’s battlefield, the entire thing was narrated to King Dhritarashtra by Sanjay as the latter was blessed by his teacher Ved Vyas and possessed the ability to see the in the battlefield from a distance.

The theories on the date of the composition of the Gita vary considerably. Some scholars accept dates from the 5th century to the 2nd century BCE. The Hinduism scholar Jeaneane Fowler, in her commentary on the Gita, considers the second century BCE to be the probable date of composition while J. A. B. van Buitenen also states that the Gita was likely composed about 200 BCE. As per Indologist Arvind Sharma, the Gita is generally accepted to be a 2nd-century-BCE text. Inspiring Verses by Lord Krishna From Shrimad Bhagavad Gita to Understand the Real Essence of Life.

At the start of the Dharma Yuddha between Pandavas and Kauravas, Arjuna is preoccupied with a moral and emotional dilemma and despair about the violence and death the war will cause in the battle against his kin. Wondering if he should renounce the war, he seeks Krishna's guidance, whose answers and the discourse constitute the Bhagavad Gita. Krishna counsels Arjuna to "fulfil his Kshatriya (warrior) duty to uphold the Dharma" through Karma "selfless action.

Devotees celebrate this day with great enthusiasm in all Lord Krishna Temples. Puja is performed and prayers are offered to the Lord. To mark this day, devotees throng to Kurukshetra and take a bath in the sacred Sannihit Sarovar and Brahma Sarovar.  Devotees also organise Bhagwad Gita Paath at home. It is believed that people can get rid of Pitra Dosha by reading Bhagwad Gita.

The Bhagavad Gita Has 18 Chapters. They Are as Follows:

(The above story first appeared on LatestLY on Nov 30, 2022 03:35 PM IST. For more news and updates on politics, world, sports, entertainment and lifestyle, log on to our website latestly.com).