Gujarat Day 2019 Date: History And Significance of The Foundation Day Of The Gujarati-Speaking State

The 'Jewel of Western India' - Gujarat - would be celebrating its 59th foundation day on May 1. 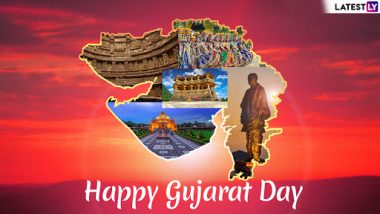 Ahmedabad, April 29: Gujarat became a different state on May 1, 1960, along with Maharashtra. Gujarat Day 2019 will mark the 59th foundation day of the state. The state will witness various events marking the observance. Celebratory programs have been arranged at each district headquarters and village panchayats of the state. Gujarat state was formed along with Maharashtra as both were divided from the then Bombay state. Happy Gujarat Day 2019 Greetings: WhatsApp Messages, Quotes, GIF Images, SMS To Wish Happy Gujarat Day.

Looking at the historical significance, the idea of the foundation of Gujarat was cropped up in the year 1928 in a magazine called Kumar. Soon after nine years, writer and freedom fighter K M Munshi first suggested a concept called Mahagujarat during a meeting of the Gujarat Sahitya Sabha, held in Karachi in the year 1937. Maharashtra Day 2019: Date, History And Significance of Maharashtra Diwas That Marks Formation of Marathi-Speaking State.

Later map of Gujarat was first seen in a magazine ahead of a poem by Devshavji Parmar titled ‘Uthtrishta Jagrat’. As per the details, Gujarat was known for its agricultural products like cotton, groundnuts, sugarcane and milk since a long time and is still known for that. Gujarat Day 2019 Wishes & Quotes: WhatsApp Messages, GIF Image Greetings, SMS To Wish On Gujarat Foundation Day.

Recent data reveal that Gujarat recorded the highest decadal agricultural growth rate of 10.97% last year and around 18,000 villages of the state have been connected to the electrical grid for 24-hours. its biggest city Ahmedabad has found a place in Forbes list of the world’s fastest growing cities at number 3 after Chengdu and Chongqing from China. Also, Gujarat is the home state of Mahatma Gandhi and ‘Iron Man of India’ Sardar Vallabhai Patel.

(The above story first appeared on LatestLY on May 01, 2019 10:33 AM IST. For more news and updates on politics, world, sports, entertainment and lifestyle, log on to our website latestly.com).