The Guru Ravidas Jayanti festival is celebrated to commemorate the birth anniversary of renowned Sikh saint Guru Ravidas. People, especially in Punjab, enjoy this special occasion, following several traditions and rituals. There’s a lot to know when it comes to the celebrations of Guru Ravidas Jayanti. 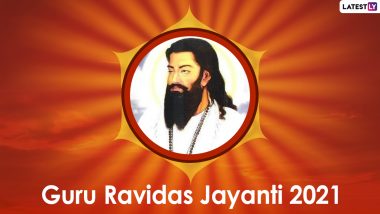 What is the Shubh Muhurat (Auspicious Timing) of the Guru Ravidas Jayanti?

There are grandeur celebrations in Gurudwaras. People also read Amritbani – a holy book written on the life and journey of Guru Ravidas. Not to forget, there are Nagar Kirtans held across the country to commemorate Guru Ravidas’ contribution to the establishment of the Bhakti movement.

Guru Ravidas was a renowned saint known for his immense contribution to societal causes. He not only established the Bhakti movement but worked tirelessly against the Indian caste system and spread the message of equality amongst the masses.

We at LatestLY, wish you all a very Happy Guru Ravidas Jayanti 2021. It will be a fitting tribute to see you sharing this information about Guru Ravidas with your loved ones on this auspicious occasion.

(The above story first appeared on LatestLY on Feb 26, 2021 04:51 PM IST. For more news and updates on politics, world, sports, entertainment and lifestyle, log on to our website latestly.com).