Hajj 2020: Rituals And Significance of Annual Islamic Pilgrimage For Muslims

The annual Haj pilgrimage is one of the five pillars of Islam, which every financially and physically-stable Muslim must perform at least once. 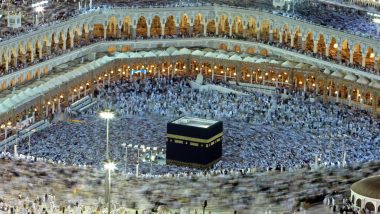 New Delhi, July 27: Muslims in Saudi Arabia will embark on annual Hajj pilgrimage on July 29. In view of the coronavirus (COVID-19) outbreak, the Kingdom of Saudi Arabia (KSA) has decided to limit the current Hajj, also spelt as Haj, season to domestic pilgrims. The annual pilgrimage is one of the five pillars of Islam, which every financially and physically-stable Muslim must perform at least once. Saudi Arabia Announces Readiness for Haj Season Amid COVID-19 Pandemic.

As they start Hajj pilgrimage, Muslims wear Ihram, two white seamless clothes for the male and normal dress for females. It is believed that with donning Ihram, they enter into a state of holiness. On the first day, 8th Dhu al-Hijjah, they confirm their intention to undertake the pilgrimage and the prohibitions of Ihram start, meaning they cannot remove it till the completion of Hajj. The Ihram symbolises the equality of all pilgrims in front of God, with no difference between the rich and the poor. Haj 2020 Update: How to Get 100 Percent Refund on Cancellation of Pilgrimage, Know Steps Suggested by Haj Committee of India.

While wearing Ihram, pilgrims cannot use perfume, cut their nails, trim their hair or beards and have sexual intercourse. The first ritual requires walking seven times around the Kaaba in Mecca. Pilgrims then head to Mina, a neighbourhood of Mecca, and spend the entire day there. The next morning after morning prayer, they leave Mina to go to Arafat where they offer prayers, repent on and atone for their past sins, and seek the mercy of Allah. They gather near Jabal al-Rahmah (The Mount of Mercy). The ritual of spending the afternoon in Arafat is known as 'standing before God' (Wuquf).

Around sunset, pilgrims leave Arafat for Muzdalifah, an area between Arafat and Mina. Upon reaching there, they perform Maghrib and Isha prayers jointly, spend the night praying and sleeping on the ground under the sky. They also gather pebbles for the next day's ritual of the stoning of the Devil (Shaitan).

On the third day, Muslims perform the symbolic stoning of the devil (Ramy al-Jamarat) by throwing seven stones from sunrise to sunset at only the largest of the three pillars, known as Jamrat al-Aqabah. After the casting of stones, animals are sacrificed to celebrate Eid Al-Adha. After sacrificing an animal, pilgrims shave their heads. On the same or the following day, the pilgrims re-visit the Sacred Mosque in Mecca for another tawaf, known as Tawaf al-Ifadah. Then, they return to Mina.

On the fourth day, the pilgrims again throw seven pebbles at each of the three pillars in Mina. This is commonly known as the "Stoning of the Devil". The same ritual is performed on the fifth day. On the last day, before leaving Mecca, pilgrims perform a farewell tawaf called the Tawaf al-Wadaa.

(The above story first appeared on LatestLY on Jul 27, 2020 01:37 PM IST. For more news and updates on politics, world, sports, entertainment and lifestyle, log on to our website latestly.com).