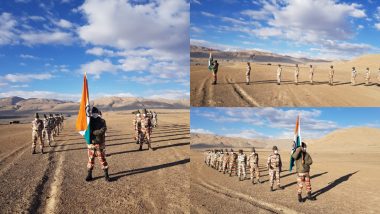 Ladakh, August 15: With India celebrating the 74th Independence Day on Saturday, Indo-Tibetan Border Police (ITBP) jawans celebrated Independence Day at an altitude of 17,000 feet in Ladakh. The ITBP even shared the images of jawans holding the Indian National flag and marching on the banks of Pangong Tso in Ladakh.

Here are the images and video posted by ITBP:

Earlier, Prime Minister Narendra Modi hoisted the national flag from Red Fort in New Delhi on the occasion of 74th Independence Day. In his address to the nation, PM Modi said that India's freedom struggle inspired the whole world and became a guiding light for others.

The Indian Premier also spoke against expansionism and a range of issues including coronavirus vaccine, adding that 130 crore Indians have pledged to make India self-reliant (Aatma Nirbhar). He announced that his government aims to ensure optical fibre network in all villages across the country. He also announced the National Digital Health System.

(The above story first appeared on LatestLY on Aug 15, 2020 10:02 AM IST. For more news and updates on politics, world, sports, entertainment and lifestyle, log on to our website latestly.com).