Magh Bihu 2021 in Kekerikuchi: It's Been 23 Years! While Assam Rejoices in Bhogali Bihu, This Small Village Mourns the Merciless Killings of Its Residents

It has been 23 years since Kekerikuchi, a small village in Assam does not celebrate Bihu. Where the state rejoices in Bhogali Bihu celebrations, this small village weeps the death of its residents who were mercilessly killed by insurgents in 1998. 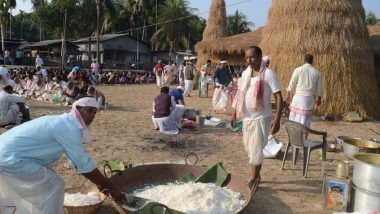 The people of Assam is celebrating Magh Bihu 2021. The festival, also called Bhogali Bihu is the state's harvest festival. Where the entire state rejoices in the eve of Uruka (bonfire) warmly; there is a small village named Kekerikuchi, Rangia tehsil that has not participated in Bihu celebrations for over twenty years now. The residents of this place could not get over its bitter memories they faced on this day. The festival since then has always been a black Bihu for the community.

The incident dates back to January 13, 1998; the Bodo militants massacred 17 people included nine women and a minor girl, five seriously injured. Twenty three years ago, where people of that village were busy preparing feasts and assembled for the Uruka festival, the Bodo militants opened fire with AK-47 on innocent villagers. The inhabitants including children were made silent with merciless killing at the brutal hands of terrorists.

According to reports, about 12 Bodo militants armed with weapons, fired on members of three families living in Kekrikuchi and Metangapar villages, 13 km from Rangiya near the Indo-Bhutan border. It is said to be the first time in the history of Assam that suspected Bodo Militants have attacked an Assamese lingual village in such a horrific way. Magh Bihu 2021 Date, Significance, Rituals & Traditions: Know More About Bhogali Bihu, the Harvest Festival Celebrated Predominantly in Assam.

Uruka, since then has turned into a dark night for the villagers who keep themselves away from the festivity. Shockingly, the children born after this incident are unaware of the significance of Uruka in their culture.

Efforts were carried ahead by several non-government organizations and projects to make people of the region come back and join hands in celebrating the festival. In the year 2002, the All Bodo Students Union, on behalf of the neighbouring villages of Kekrikuchi contributed a token amount for constructing a memorial for those 17 people who were killed.

Their efforts showed results with the villagers at least take efforts to make peace with the past. They gather in a mausoleum place, lightens earthen lamps, offers naam-kirtan (religious performance in a musical form of narration in Assamese culture) in the memory of lost lives and prays for harmony and peace. Meanwhile, the people of Assam together celebrated Magh Bihu praying to Lord Agni (fire) to take away all evils.

(The above story first appeared on LatestLY on Jan 14, 2021 03:55 PM IST. For more news and updates on politics, world, sports, entertainment and lifestyle, log on to our website latestly.com).