Mahashivratri 2019: Know Mythological Legends and Stories Associated With The Celebration of Maha Shivratri

There are many mythological legends and stories related to the celebration of Mahashivratri. 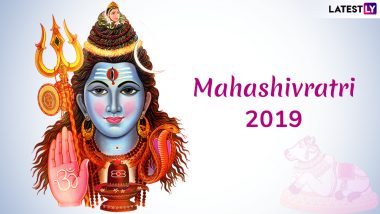 Day-long fasts, tolling temple bells, midnight devotional song and dance for the love of Lord Shiva dominates Mahashivaratri. This year, the auspicious 'great night of Shiva' is celebrated on March 4 and there is a significant devotions circulated around the festival. Maha Shivaratri is a Hindu festival which is majorly celebrated in India as well as in Nepal. According to the Hindu calendar, Maha Shivratri 2019 falls on the new moon day in the Hindu month of Maagha. Lord Shiva is considered of great importance in Hindu mythology, and he is said to be the ‘destroyer of evil.’ There are many mythological legends and stories related to the celebration of Mahashivratri 2019. In this article, we have listed the top four histories and significance behind the observe of the great night of Lord Shiva. Visit These Lord Shiva Temples in India to Witness The Best of Maha Shivaratri.

The marriage of Shiva and Shakti

The legend of the nuptial of Shiva and Shakti is one of the most important stories related to the festival of Shivratri. It tells how Lord Shiva got married a second time to Shakti, his divine consort. After Devi Sati’s immolation, Lord Shiva undertook rigorous penance and retired to the Himalayas. Sati took a re-birth as Parvati in the family of God Himalaya. Parvati performed severe penance to win over Shiva and through her devotion and persuasion by sages’ devas, she won Shiva’s love, convinced him for marriage and away from asceticism. Lord Shiva and Parvati’s marriage was solemnised a day before Amavasya, in the month of Phalguna. This day of the union of love is celebrated as Mahashivratri every year.

Another version of the legend also states that Goddess Parvati performed tapas and prayers on the auspicious moonless night of Shivaratri to ward off any evil that may befall her husband. It is also since then; women started the custom of praying for the well-being of their husbands and sons on Shivaratri day. Unmarried women pray and keeps long fast and pray to marry a person like Shiva who is considered as the ideal husband. Know Maha Shivaratri History, Significance and Legends Associated With the Festival of Lord Shiva.

Samudra Manthan is very popular Shivaratri legend from Puranas, and it explains why devotees stay awake all night on Shiv Ratri. During the Samudra Manthan (churning the ocean for the nectar of immortality), ‘haalaa-hala’ a pot of poison also came out of the ocean. This terrified the Gods and demons as the poison was very toxic so much that its effects could have wiped out the entire creation. On the advice of Lord Vishnu, all the devas and Gods approached Lord Shiva for help and protection as only he could swallow it without being affected. On everyone’s requests and to save the living beings, Lord Shiva drank the poison. Goddess Parvati pressed his neck during the process so that the poison does not reach his stomach. Hence, it stayed in his throat neither going up or going down, and Lord Shiva remained unharmed. List of Special Trains on 2019 Mahashivratri & Holi.

The poison was very potent, and it changed the colour of Lord Mahadeva’s neck to blue. This is why, Lord Shiva is also known as Neelakantha (the blue-necked) where ‘Neela’ means blue, and ‘Kantha’ means neck or throat. As a part of the therapy, doctors advised the gods to keep Lord Shiva awake during the night. To amuse him and keep him awake, the gods took a turn performing various dances and playing music. Impressed by their potential, Lord Shiva blessed them all. Hence, on Shivratri, devotees meditate, keeps fast, sing glories, dances whole night to Lord Shiva, who saved the world.

The myth of Shiva Linga is deeply related to Mahashivaratri. The legend narrates the story of vain search by Brahma and Vishnu to discover the Aadi (beginning) and the Antha (end) of Lord Shiva. It proves the supremacy of Mahadeva over other Hindu gods and explains why the lingam is believed to be one of the most potent emblems in Hindu ideals. According to Puranas, once Hindu Gods, Brahma and Vishnu were fighting over each other’s prowess. Horrified at the intensity of the battle, other Gods requested Shiva to intervene. To make them realise the futility of their fight, Lord Shiva assumed in the form of flaming Linga in between Brahma and Vishnu and challenged both of them to measure it.

Since, it was the 14th day in the dark fortnight of Phalguna that Lord Shiva manifested himself in the form of a Linga, the day is exceptionally auspicious and hence celebrated as Mahashivaratri.

Legend of the Ganga

The myth of the Ganga’s descent from the heavens into the earth has often been narrated in the Hindu mythological epic of Ramayana. It explains the widespread custom of giving a bath to Shiva Linga during the festival of Shivratri 2019. Hearing the plight of those 60,000 princes who was burnt down to ashes by the Kapila Muni, King Bhagirath was advised that the waters of the river Ganga would miraculously bring back the dead princes to life. He left his kingdom and began to meditate for the salvation of the souls of his ancestors. It is said that Bhagirath for a thousand years, requested Ganga to come down to earth from heaven and wash over his ancestors’ ashes to release them from a curse and allow them to go to heaven. Pleased with his devotion, Lord Brahma granted Bhagirath’s wish but told him to pray Lord Shiva, as he alone could sustain the weight of her descent.

Lord Shiva held out his thick matted hair to catch the river as she descended. The meandering through Shiva’s lock softened Ganga’s to the earth, and the holy waters of the river thus washed away the ashes of Bhagirath’s ancestors. The Ganga became an attribute of Shiva, and this manifestation of Mahadeva is also known as Gangadhara. For this reason, many Shiv bhakts take a dip in the holy water of the river Ganga on a Shivratri day.

During Shivratri, Mahadev bhakts are engaged in devotional activities such as fasting, yoga, all-night vigil, worship of Lingam to impress the lord. It is said that those who observe sincere worship of Shiva, on this day will attain moksha. Maha Shivaratri 2019 is also denoted overcoming of darkness and ignorance in life. Apart from the above, there are many stories related to the observance of Maha Shivratri 2019.

(The above story first appeared on LatestLY on Mar 04, 2019 08:24 AM IST. For more news and updates on politics, world, sports, entertainment and lifestyle, log on to our website latestly.com).