National Suicide Prevention Week 2021 Date & Significance: Know More About the History and Importance of the Day Aiming at Spreading Awareness about Suicide 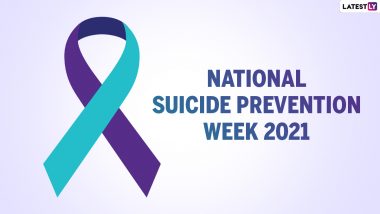 National Suicide Prevention Week is observed on September 5 every year. In order to create awareness about suicide and to help prevent the same, every year National Suicide Prevention Week is observed.  According to the World Health Organization (W.H.O) report: “Preventing Suicide: A Global Imperative”, about 800,000 people around the world commit suicide every year. Mental health issues like depression are known to be one of the biggest causes of suicide around the world. The week is observed to spread awareness about mental health among the people and to prevent the increasing cases of suicide. World Suicide Prevention Day: Facts, Myths and Figures About Suicide You Should Know!

National Suicide Prevention Week history dates way back. In the US suicide is the 11th major caused of fatality as of 2009. The American Association of Suicidology (AAS) also estimates that there are over 4.6 million survivors of attempted suicide in the United States. With approximately 1.8 million attempts every year the AAS sponsored National Suicide Prevention Week to help spread awareness about suicide and its prevention. If you know that your loved one is going through a stressful time and has suicidal tendencies, here are ways to help someone with depression and suicidal thoughts.

The day is co-sponsored by health organizations and mental health federations. According to the World Health Organization, one person commits suicide every 40 seconds. More than 8 lakh people commit suicide every year. Whereas an even greater number of people attempt suicide. This shows how much mental stress impacts people's life. According to this data, 79 percent of suicides worldwide are committed by people from low and middle-class countries. More young people are known to take major steps such as suicide. Many reasons such as the pressure of studies, career issues and deteriorating relationships are some of the most common reasons behind mental health issues.

(The above story first appeared on LatestLY on Sep 04, 2021 04:24 PM IST. For more news and updates on politics, world, sports, entertainment and lifestyle, log on to our website latestly.com).