No Happy Dussehra 2020 in These Ravana Temples in India! Learn More About The Places of Worship That Venerate The Lankan King and Don't Celebrate Vijayadashami 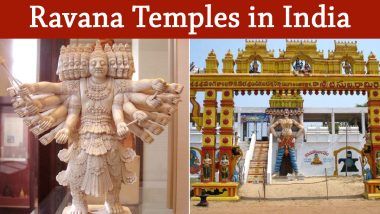 Happy Dussehra 2020! You and your friends and family members may have exchanged such greetings today for the festival of Vijayadashmi. But in some parts of the country, this is a dark day with no celebrations. The festival of Dussehra is observed to celebrate the victory of Lord Rama over the demon king Ravana. This day celebrates the idea of good over evil, with Ravana viewed as the enemy. People even burn effigies of the ten-headed demon king on Vijayadashami. As most people in the country despise Ravana and his evilness, But not everyone. There are temples in the country dedicated to worship of the Lankan King. Ravana is worshipped by some people because of his dedication towards Lord Shiva or Mahadev. He is also called as one of the greatest devotees of Lord Shiva. On this Dussehra 2020, we tell you more about the temples of Ravana in India and why he is worshipped. Dussehra Shubhechha 2020 HD Images & Marathi Wishes: Dasara Chya Hardik Shubhechha WhatsApp Messages, Ravan Dahan GIF Greetings, SMS and Quotes for Vijayadashami.

Bisrakh is believed to be the birth place of Ravana. The village is said to derive its name after Ravana's father Vishrava. It is said that Vishrava built a temple here to accommodate a Shiva Ling he found in forest grove. Each year on Dussehra, this village observes a mourning, while the rest of the country celebrates.

The Maudgil Brahman community are said to be descendants of Ravana. They came from Lanka here during the marriage of Ravana's marriage to Mandodari. Their marriage took place at Mandore, which is named after his wife. So people here consider Ravana as their son-in-law. The temple premise has not only but several idols of King Ravana. On Dussehra 2020, Know What The 10 Heads of Ravana Stand For, Interesting Facts About The Demon King of Lanka That Reveal His Other Side.

Baijnath is a town in Kangra that reveres Lord Ravana. As per legends, during the Treta Yuga, Ravana worshipped Lord Shiva. In order to please the lord, he even offered his heads in the Havan kund. Lord Shiva was pleased with his extraordinary deed. He gave him his heads back and also bestowed him with powers of invincibility and immortality. Because of his dedicated worship towards Shiva, Ravana is worshipped here by the villagers.

This is the only place in Andhra Pradesh that worships Ravana. It is believed that Ravana once chose this place to build a temple for Lord Shiva. The temple here sees images of Lord Ravana with the Shiva linga. The entrance itself sees a huge statue of Ravana with his ten heads.

Ravangram Temple is located in the city of Vidisha, MP. Everyone here is a devotee of Ravana and the temple here is unique as it sees a 10-oot-long statue of the Lanka king in a reclining position. The temple was made by Kanyakubja Brahmins- a sub sect which Ravana is believed to be a part of. This city also does not see any celebration of Dussehra, but instead on other joyous occasions, they revere him as 'Lord Lankesh.'

People on the Gond tribe in Maharashtra's Gadchiroli region respect Ravana and his son Vibhishana. They believe that Ravana has done nothing wrong or cruel. The Ramayana by Valmiki never mentions him as an evil but that he was demonised by Tulsidas' version of the epic. They even boycott the burning of effigies on this festive day.

So these are some places in the country which hold Ravana as their Godly figure and respect him. While the rest of the country marks the celebration and burn off his effigies as a symbol of evil, these places stand out for their alternative beliefs in the mythologies.

(The above story first appeared on LatestLY on Oct 25, 2020 11:50 AM IST. For more news and updates on politics, world, sports, entertainment and lifestyle, log on to our website latestly.com).