Rajmata Jijau Punyatithi 2021: From Date, History to Significance, All You Need To Know About This Formidable Woman on Her Death Anniversary

Rajmata Jijau, an able warrior, administrator and mother of Chhatrapati Shivaji Maharaj, death anniversary will be observed on June 17th. Jijau was a formidable woman who was born on 12 January 1598 at Deulgaon near Sindkhed. She was widely known as Rajmata, Jijabai or Jijau. 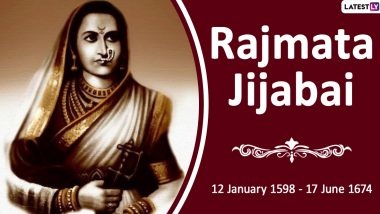 Rajmata Jijau, an able warrior, administrator and mother of Chhatrapati Shivaji Maharaj, death anniversary will be observed on June 17th. Jijau was a formidable woman who was born on 12 January 1598 at Deulgaon near Sindkhed. She was widely known as Rajmata, Jijabai or Jijau. She was married to Shahaji Bhosale, son of Maloji Bhosale of Verul village. Jijau was no wallflower who shied away from the hardships of life. She was a determined warrior of strong constitution and foresight that she passed on to her son who grew up to be a man of strong character, beliefs, acute administrative skills and a fierce warrior of Maharashtra.

Jijabai was married at an early age to Shahaji Bhosale a diplomatic official who served the Nizam Shah. Shahaji Bhosle - the son of Maloji Shiledar,  later climbed up the ranks to become ‘Sardar Maloji Rao Bhosle’. Together they had eight children - six were daughters and two were sons. Her Son Chhatrapati Shivaji would later go on to rule the Maratha Empire. Her eldest son was killed by Afzal Khan, who was avenged by  Shivaji with his mother's blessings.

Following the death of her husband, Jijabai the queen regent moved to Poona taking Shivaji with her. In 1666 Shivaji left for Agra, leaving Jijabai to manage the affairs of the state. She was quite heartbroken following the demise of her husband and her son, She was also incredibly proud of her son Shivaji's conquests that will eventually turn him into Maratha Emperor. She rallied behind her son and is said to be quite instrumental in his victories as she encouraged him through every battle. She was a pillar of strength and Shivaji credits her with his achievements. She was the embodiment of strength. However, she died on 17 June 1674, a few days before Shivaji's coronation. Her death was mourned by the entire kingdom and is observed to this day.

(The above story first appeared on LatestLY on Jun 16, 2021 04:57 PM IST. For more news and updates on politics, world, sports, entertainment and lifestyle, log on to our website latestly.com).