Raksha Bandhan 2019: From Aarti to Tilak, Importance and Meaning of Each Step of Tying a Rakhi Explained 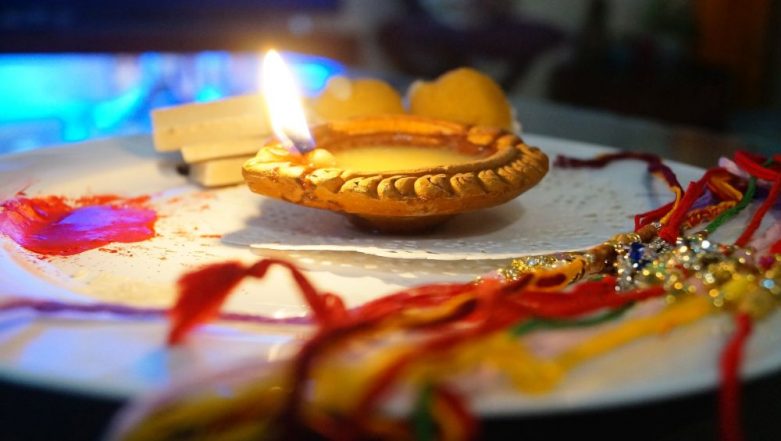 Raksha Bandhan the Indian festival that celebrates the sacred bond between brothers and sisters will be observed on August 15, 2019. On this day, sisters will honour their brothers by tying a ceremonial thread or rakhi on their wrists. The brothers, in turn, will gift their sisters and vow to protect them for life. The tradition finds its origins in many mythological tales from Hinduism. Although some of the Raksha Bandhan rituals have changed to suit the modern times, a few have stood the test of time. On Raksha Bandhan morning, brothers visit their sisters’ homes bearing gifts. The sisters will then perform a set of rituals honouring their brothers. Each step has a deeper, symbolic meaning and is performed with a certain intent. On Raksha Bandhan 2019, here’s a complete breakdown of every step of the ritual, from performing the aarti to tying the rakhi.

The Steps of Raksha Bandhan

Sisters prepare a thali or a ceremonial plate decorated with religious paraphernalia. A diya; a mixture of rice and turmeric known as akshat; kumkum tilak known as roli; sweets and the rakhi. Raksha Bandhan 2019: From Diya to Akshat, Here Are Holy Things That You Must Place on the Thali to Complete the Rituals.

The thali is first worshipped at the altar of God. The entire family prays. The brother sits on a low wooden stool. The sister then mixes the kumkum with a little yoghurt to form a paste, which is applied on the brother’s forehead.

She ties the rakhi on the brother’s right wrist. Then does the aarti by swaying the thali with the diya in a clockwise pattern three times.

She then sprinkles the rice and turmeric mixture on the brother’s head and offers him a sweet. Here is each step of Raksha Bandhan explained.

On Raksha Bandhan, sisters apply a tilak on the forehead of their brothers. It’s a mark of auspiciousness. Before any good deed, it’s customary to apply tilak. The sister puts the tilak on her brother’s forehead to honour him and to marks the body’s most important chakra – the Ajna Chakra or the seat of the mind or the third eye. Applying tilak grants long life, strength and salvation to the person. Raksha Bandhan 2019: The Legend of Krishna and Draupadi and Other Mythological Stories About the Festival of Brothers and Sisters.

Rakhi is a ceremonial thread that has deep symbolic meaning. By tying the rakhi on the brother’s wrist, the sister strengthens the bond the two share. It is a sign of the brother’s moral obligation and responsibility towards his sister to protect and care for her.

a mixture of rice and turmeric used during pujas – has a lot of religious significance in Hinduism. It is a symbol of perfection and prosperity. The world Akshat means “indestructible.” Since rice is covered by a husk, it is considered the purest and the holiest. By sprinkling akshat on the brother, the sister purges any negative energy that may surround him. She also prays that he becomes indestructible even in the face of adversity.

When the sister waves the ceremonial platter or thali with diya around the brother three times in a clockwise motion, she expresses her devotion, respect and love towards her brother. The fire of the burning diya is an all-purifying force that destroys any harmful energy around the person. Performing an aarti for the brother is, therefore, an important step.

The last step of the Raksha Bandhan ritual is to offer sweets to each other. It’s a perfect conclusion to the set of rituals. Offering sweets is a symbolic way of ending the ceremony on a sweet, memorable note.

Every sister looks forward to receiving gifts from her brother when the ceremony concludes. In the end, the brother bestows gifts on the sister as a mark of his love and as a token of his promise. Traditionally, the brother offers money, new clothes or jewellery to his sister. These days, the gifts range from cosmetics to electronics.

Raksha Bandhan is a sweet reminder of the indestructible bond between brothers and sisters. It’s limited not only to people related by blood but also those who are not biological siblings. Sometimes friends tie the rakhi to friends, cousins tie it to cousins, and sometimes, even sisters tie it to their sisters. What matters is the love shared between the two people and the promise of trust and protection.