In Myorabad area, a group of women started buying raw material for making rakhi. One woman first taught the other to make rakhi and later they distributed the work among themselves and made about 500 rakhis. 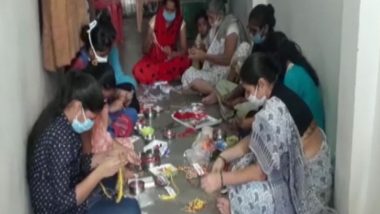 Prayagraj, July 22: As the imposition of nationwide lockdown led to a rise in unemployment, a group of women in Prayagraj has decided to become self-reliant following Prime Minister Narendra Modi's call to become "Aatmanirbhar" and started making rakhis in order to boycott Chinese products.

Troubled by their husbands' unemployment, loss of income, these women started to make rakhis, which in turn became a source of income for many of them. Raksha Bandhan 2020 Special: From Food to Customised Photos, 5 Types of Rakhi Designs That Will Show Your Unique Bond.

In Myorabad area, a group of women started buying raw material for making rakhi. One woman first taught the other to make rakhi and later they distributed the work among themselves and made about 500 rakhis.

"All the women were sitting at home during the lockdown period so we decided to make rakhis this year, following which we bought the raw material and started decorating rakhis. Lockdown has also led to unemployment, husbands were sitting at home so we thought this would become our medium to earn something and sustain," said Anuradha.

"Another aim was to defeat China and its products. May be not on a very large scale but even if we are able to boycott some of its products, it would be a good move towards the development of our country. As PM Modi has told everyone to become Aatmanirbhar, so we are trying to move towards that goal. We have a lot of talent in our country and there is nothing we cannot make in our own country," she added.

She believes that comparatively, their rakhis might not be as good as those available in the markets but she is happy with the fact that her rakhis are made in India. Raksha Bandhan 2020 Rakhi Designs: From Rudraksha to Cartoon, 5 Types of Rakhis to Choose For Your Brother.

These women plan to set up a stall to sell rakhis. They are expecting to earn a good amount of money out of it. Around 15 women are currently a part of this group. The range of their handmade rakhis is between Rs 10 to Rs 35.

"All of us were so disturbed amid the lockdown due to unemployment. We would like to thank PM Modi for supporting us during this tough time. Though the government has started providing free ration. We started gathering women here and decided to design rakhis with an aim to become Aatmanirbhar. We do not want anything from China," said Nirupasi.

Nirupasi hopes to spread their business at least within their city. The group of these women appealed everyone to buy their rakhis and move ahead towards becoming "Aatmanirbhar". Raksha Bandhan will be celebrated on August 3 this year.