World Elder Abuse Awareness Day 2021: Quotes, Messages To Share and Raise Awareness About The Issues Faced By The Elderly 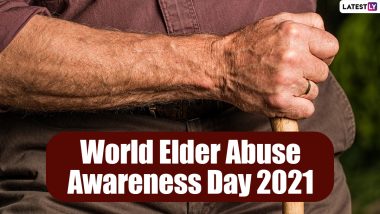 Each year, World Elder Abuse Awareness Day is celebrated on June 15 to highlight and raise awareness about the injustice and violence faced by the elders, who are subjected to growing physical and mental abuse in our community. The society that the older help build for the future generations often tends to forget their contribution to society. The aged are rendered redundant by the younger generation and hence are often ignored. It's our responsibility and duty to take better care of our elders who help build the past, that laid the foundations to our present and their contributions will encapsulate the future.

This day is celebrated every year as a reminder to take better care of Individuals who fall into the older spectrum of age. The older generation requires support, assistance and proper care and it is our responsibility to make their lives a bit easier to lead. This day observed to raise awareness about the issue of elder abuse, was conceptualized on June 2006, when a request was placed to declare June 15 to highlight the plight of elders. However, it was only in 2011 the World Elder Abuse Awareness Day was officially recognized by the United Nations General Assembly. Share inspiring quotes and messages with your close ones to raise awareness about elderly people in your community.

The theme for World Elder Abuse Awareness Day is “Access to Justice,"  which should serve as a wake-up call to the world at large to stop the injustice wreaked on the elderly.

(The above story first appeared on LatestLY on Jun 15, 2021 11:54 AM IST. For more news and updates on politics, world, sports, entertainment and lifestyle, log on to our website latestly.com).