National Popcorn Day 2020: Fun And Interesting Facts About Popcorn That Will Make You Grab a Tub Next Time In Theatre! 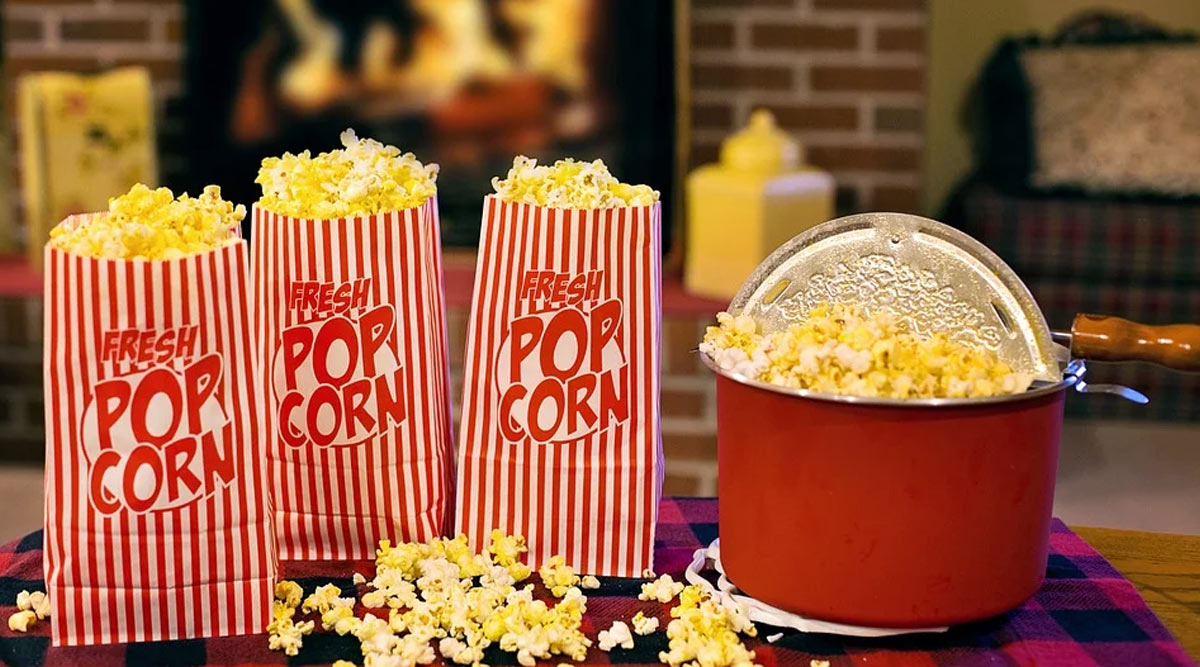 National Popcorn Day 2020 will be celebrated on January 19, Sunday. Every year, this day is celebrated with people enjoying popcorns with various toppings like caramel, butter and salt. Most of us are unaware that original corn was derived from a small grass with kernels not much different than that of wheat, careful selection and generations of breeding have resulted in what we think of today as the corn plant. On occasion of National Popcorn Day 2020, we will discuss a lot more amazing and unknown facts about popcorns. Piece of Popcorn Stuck in British Man's Teeth Caused Near-Fatal Infection Leading to Open-Heart Surgeries; Know More About Endocarditis.

Let's begin with knowing a little bit about the history of National Popcorn Day. In the year 1948, Herbert Dick and Earle Smith discovered small heads of Zea Mays Everta that is a particular variety of corn, where kernels burst when exposed to dry heat. However, several other popped kernels were also discovered, which have since been carbon dated and shown to be approximately 5,600 years old. Plain popcorns are actually considered a healthy snack option as they are low in calorie and are also packed with antioxidants. And now it's time to check out fun facts about popcorns. Can Popcorn Make You Gain Weight? 3 Questions Answered About the 'Healthy, Low Calorie' Snack.

1. According to Guinness World Records 2015, the world’s largest popcorn ball, was created in 2013 at the Indiana State Fair. It was prepared with the help of pop weaver, Snax in pax and Indiana's Family of Farmers. The popcorn ball weighed in at 6,510-pounds, 8 feet in diameter.

2. Kernels can pop upwards to the height of three feet high. Also, there are approximately 1,600 kernels in a single cup of unpopped popcorn.

3. Most popcorns come in two basic shapes when it's popped, that is, snowflake and mushroom. Snowflake is used in movie theatres while mushroom can be found in candy confections as it doesn't crumble.

5. Popcorn is the official snack of Illinois states in the United States.

6. It is said that Christopher Columbus introduced popcorn to the Europeans in the late 15th century.

8. During World War II Americans ate three times more popcorn instead of sugary snacks as there was sugar shortage in the US at that time.

9. Earlier before the introduction of stoves and microwaves, hot sand was used to provide the right kind of heat to make corn kernels pop.

10. Native Americans apart from eating popcorn made beer and soup out of it too.

One good way to celebrate National Popcorn Day 2020 is by visiting the Cineplex chain in Canada, where movies can be enjoyed with complimentary buttery popcorn exclusively for this day only. Apart from this, you can always spend time with family and friends while watching movies at home.