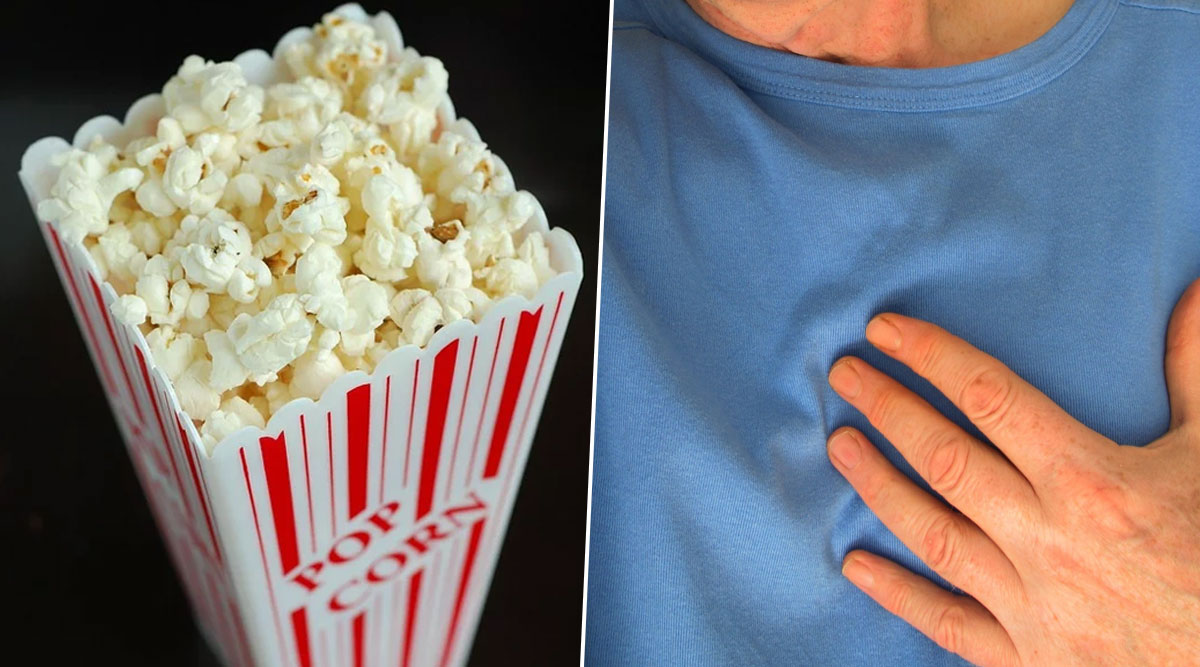 While it may seem highly unlikely for a piece of popcorn to cause open-heart surgery, but this medical incident experience by a 41-year-old British man proves that no trigger can be called small. The story of a piece of popcorn causing open-heart surgeries started with  Adam Martin, a firefighter and father of three from Cornwall, England, who had a stubborn piece of popcorn stuck in his teeth for the longest time. His failed attempts to dislodge the piece of snack made him stick various objects into his teeth some of which even damaged his gums. Man's Cauliflower-Like Cancerous Tumour on His Penis Noted by Police Officer Who Pulled Him over After Being Suspicious of a 'Large Bulge'.

The usage of various items to remove the irritant gave him a life-threatening infection that required him to undergo open-heart surgery.   He noticed the piece of popcorn stuck in a back tooth after a movie he went to watch with his wife in September.  Although, he used various objects to remove the piece like, a pen lid, a toothpick, a piece of wire and even a metal nail, for three days, he was unable to remove the popcorn.

This damage to his gums made him catch an infection that caused the bacteria to enter the bloodstream and reach his heart in a few weeks. The symptoms began a week after Martin's failed attempts. He began to have flu-like symptoms like night sweats, fatigue, headaches.  In October he went to the doctor who sent him home after diagnosing a mild heart murmur. But after he saw that his symptoms didn't subside, he went to the Royal Cornwall Hospital where the scans showed that his heart had been affected due to an infection. He had to be immediately transferred to another hospital where he underwent various open-heart surgeries to repair his mitral valve and replace his aortic valve. He was suffering from endocarditis also known as an infection of the endocardium which is the lining of the interior surfaces of the chambers of the heart that can turn fatal in many cases. Know more about endocarditis.

Endocarditis is caused after infection from another part of your body reaches the bloodstream and then the heart. The infection of the endocardium, the inner lining of the heart chambers and heart valves is caused after bacteria or other germs from an infection in other parts of your body reach the heart via the bloodstream. While this may be a rare occurrence, the consequences can be fatal if not subjected to immediate treatment. The infection from your mouth may spread through your bloodstream may cause damage to your heart. The infection can turn fatal in duration as small as six weeks if not treated in time.  In some cases, bacteria in the mouth may trigger endocarditis in people who are at a higher risk, especially people having gingivitis. Constant gum bleeding can cause the bacteria to enter the bloodstream and infect other parts of the body like the heart.

Adam Martin had a piece of advice he wanted to give after the near-death experience. He said to Foxnews: "If I had gone to the dentist in the first place then none of this would have happened. At one point it was touch and go. It was the worst experience of my life. I wasn’t far off death’s door and I am extremely lucky. The popcorn stuck in my teeth is the only possible cause I can think of. I am never eating popcorn again that’s for sure. It’s crazy to think all this happened because of that. It was something so trivial."