Bollywood actress Anushka Sharma turns 32 years old on May 1, 2020. She is known for her remarkable acting and stunning look. Anushka Sharma is the wife of Indian Cricket Team skipper Virat Kohli. The famous couple is known by the name 'Virushka' and is indeed one of the fittest pair in the world. 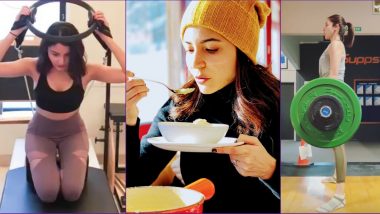 Bollywood actress Anushka Sharma turns 32 on May 1, 2020. She is known for her remarkable acting and drop-dead gorgeous looks. Anushka Sharma is the wife of Indian Cricket Team skipper Virat Kohli. The power couple is given a starry moniker, 'Virushka' by their ardent fans. Now, what makes this pair incredibly happening is their good looks, charming personalities, never-say-die attitudes and above all their love for leading a healthy lifestyle. Anushka happens to be one of the fittest stars in the Indian film industry and in the company of her husband, she strives to be better. She compromises on nothing when it comes to fitness. As we celebrate Anushka Sharma's 32nd birthday, let us have a look at her workout and diet which helps her maintain a slim body. Virat Kohli, Anushka Sharma Urge People to Stay Indoors During 21-Day Lockdown; ‘These Are Testing Times, We Need to Stand United’, Says Celebrity Couple.

The Bollywood actress incorporates strength training, pilates, cardio exercises in her training regime. Inspired by her husband Kohli's weight training, Anushka also does exercises like deadlift, barbell squat and clean. Apart from that she also concentrates on training her core. The PK movie actress dedicates time for yoga and meditation too.

As per food.ndtv.com, Anushka is a big foodie, however, she ensures to burn off whatever she eats.  She has also been blessed with a high metabolism, that itself helps her to stay ultra-fit. The Ae Dil Hai Mushkil actress eats in every two hours. Anushka Sharma loves to eat home-cooked food that normally has dal, chapatti, salad and vegetable curry. Most importantly, the gorgeous lady always keeps herself hydrated, which in a way is a secret behind her glowing skin.

Anushka Sharma was born in Ayodhya and raised in Bangalore. Her first modelling assignment for the fashion designer Wendell Rodricks in 2007 and later moved to Mumbai to pursue a full-time career as a model. She made her debut in Bollywood opposite Shah Rukh Khan in the highly successful romantic film Rab Ne Bana Di Jodi (2008). Now let us have a look at the actress exercise regime and eating habits. Anushka Sharma Yells 'Aye Kohli, Chauka Maar Na' To Give Virat Kohli The Field Experience And His Reaction Is Hilarious (Watch Video)

Anushka Sharma will be celebrating her birthday this time with her husband Virat Kohli at their residence, as an outdoor function cannot take place due to coronavirus pandemic situation. However, we wish Anushka Sharma a very Happy Birthday, may the coming year bring lots of happiness and success in her life.

(The above story first appeared on LatestLY on May 01, 2020 08:00 AM IST. For more news and updates on politics, world, sports, entertainment and lifestyle, log on to our website latestly.com).