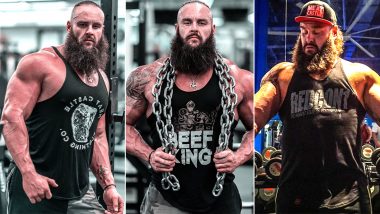 Adam Scherr, famously known by the ring name of Braun Strowman, turns 37 years old on September 6, 2020. Strowman is currently signed to the SmackDown brand of WWE where he also has a sobriquet of The Monster Among Men. He is the former Universal Champion. Apart from holding this prestigious title, Strowman has also been Intercontinental Champion once and a two-time WWE Raw Tag Team Champion. Strowman made his debut in WWE in the year 2014, however, got the limelight in the year 2015 when he was part of The Wyatt Family whose leader was Bray Wyatt. On the occasion of Braun Strowman's 37th birthday, we will throw light on his workout and diet. WWE Payback 2020 Results and Highlights: Roman Reigns Becomes Universal Champion; Shayna Baszler, Nia Jax Defeat Sasha Banks, Bayley to Win Women’s Tag Team Title (View Pics)

A lil #FBF video my boy @silverbackkrew sent me. This was four weeks after I tore my bicep at the 2013 @arnoldsports #ArnoldClassic man time fly. That will be 7 years ago next weekend!!!! #IdgafIWasHurt #TrainThroughThePain #NeverGotItFixed #Strongman #DeadLift #Yeet

Putting the fabric to the test in these #ShortyShorts I just got!!!!! @y_silence cutting me no slack but how the hell am I supposed know my legs are growing if I can’t see them. #ThatHammySweepThough #DatAss #Booty #ButtWorkOut #IHateTrainingLegs #ThickThighsSaveLives

Braun Strowman Training His Back

Braun Strowman eats like a monster as his huge body requires him to eat a lot. However, the wrestler prefers eating whole and clean food. Strowman concentrates on his intake of macronutrients - carbohydrates, proteins and fats. Strowman eats around 15,000 calories in a day, however, it must also be noted that he does a workout in the gym also accordingly.

Since I got asked all the time how and what I eat. Well here's a normal breakfest at @wafflehouseofficial two chick breast 8 scrambled eggs double order of hash browns covered and chunked three pieces of bacon and marble raisin toast with a large oj and water. #EatLikeAMonster #BeAMonster #ImAGrowingBoy #braunstrowman

Braun Strowman recently lost his Universal Title to Bray Wyatt at SummerSlam 2020. He was also involved in a triple threat match at WWE Payback 2020 against Roman Reigns and Bray Wyatt for Universal Championship, the belt was here won by The Big Dog. We hope that Strowman strikes back strong again and we wish him a very Happy Birthday.

(The above story first appeared on LatestLY on Sep 06, 2020 08:01 AM IST. For more news and updates on politics, world, sports, entertainment and lifestyle, log on to our website latestly.com).