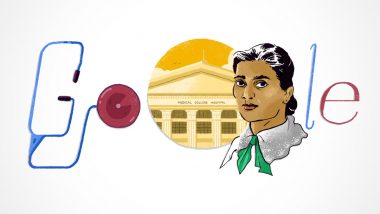 According to Oddrija, at the time when the world is grappling to deal with the COVID-19 pandemic, medical infrastructure and doctors have been hailed as heroes for becoming the saviours the world needs. She said, “Looking back in time, Kadambini Ganguly was a frontrunner in her contribution to medical infrastructure in India with her indomitable spirit and inquisitiveness that landed her a triple diploma in her studies in Western Medicine.” Dr Vera Gedroits 151st Birth Anniversary Google Doodle: Search Giant Honours Russia's First Female Military Surgeon! From Her past to Contributions.

Oddrija added, “In the same spirit, working on this doodle was a super proud moment for me—getting to represent a young, spirited woman from pre-independence Bangladesh because my own familial roots are also in Bangladesh. Alongside the same, I got to represent some aspects of my own home town which is Calcutta.” Through this doodle, the artist wanted to give a message that healthcare workers and frontline workers should be treated with “a bit more respect” as since 2020 had shown people how fragile human life could be.

Dr. Ganguly was born on July 18, 1861, Bhagalpur, British India, now Bangladesh. Her father, Braja Kishore Basu, a co-founder of India’s first women’s rights organisation, enrolled Ganguly in school during an era when education was uncommon for Indian women. She took the reins on the opportunity, and in 1883, Kadambini Ganguly and her peer Chandramukhi Basu in became the first women to graduate college in Indian history.

Soon after graduating, she married a professor and activist, Dwarkanath Ganguly, who encouraged her to pursue a degree in medicine. She persisted—despite numerous initial rejections—until she was eventually admitted to Calcutta Medical College. Dr. Ganguly graduated in 1886, making history once again as the first woman to become an Indian-educated doctor.  She was also trained in Scotland.

(The above story first appeared on LatestLY on Jul 18, 2021 09:24 AM IST. For more news and updates on politics, world, sports, entertainment and lifestyle, log on to our website latestly.com).