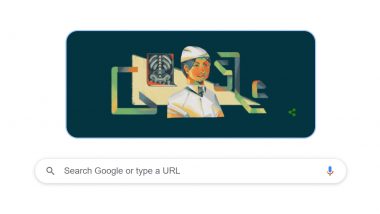 The Google Doodle today has been dedicated to Vera Gedroits 151st Birth Anniversary. The creative honours Russia's first female surgeon. The search giant has prepared a special doodle today that includes a picture of Vera Gedroits in the place of 'O' in Google. Princess Vera Ignativena Gedrowitz was a Doctor of Medicine and Russia's first female military surgeon. Not only this, she was the first woman professor in the field of surgery and the first woman to serve as a doctor in the Imperial Palace of Russia. In addition to being a surgeon, Vera Gedroit was also a professor, poet and writer. Vera Gedrowitz is known for her fearless service and saving the lives of countless soldiers in the field of combat medicine. Thank You Coronavirus Helpers Google Doodle: Appreciation Greeting Cards, WhatsApp Messages, GIF Images, Positive Quotes of Gratitude to Send out to All COVID-19 Warriors.

As a young physician, Gedrowitz first voiced her opinions regarding hygiene and nutrition in Russia. She also made recommendations to improve Russia's medical conditions. Born on April 19, 1870, into a prominent family of the Lithuanian royal dynasty of Kyiv, she was part of the Russian Empire. Vera Gedrowitz studied medicine in Switzerland. As a doctor, Vera returned to the country at the end of the 20th century and soon after this, she started her medical career as a surgeon in a factory hospital.

Vera Gedrowitz had five siblings but she was the youngest one who could read. One of her brothers died at a young age due to a lack of proper medical care, after which she decided to become a doctor. It was only after the death of her brother Sergei that she vowed to become a doctor so that she could help stop the misery of others. Her father was a Catholic while his mother was quite orthodox. Till her last moment, she treated people and did social work. She died in Kyiv in 1932 at the age of 56. She had written several books related to surgery, which came in handy in the future of medicine.

Vera Gedrowitz was not just surgery and medical professor but had also written several medical research. Her talent as an author was not just limited to academics. Dr Gedrowitz has published several collections of poems, including her 1931 memoir 'Life'. In this book, she has told the story of her personal journey.

(The above story first appeared on LatestLY on Apr 19, 2021 08:47 AM IST. For more news and updates on politics, world, sports, entertainment and lifestyle, log on to our website latestly.com).