Dr Yi Fan, Wuhan Doctor Whose Skin Turned Dark Because of COVID-19 Treatment Gets His Complexion Back After Fully Recovering From Coronavirus (Watch Video) 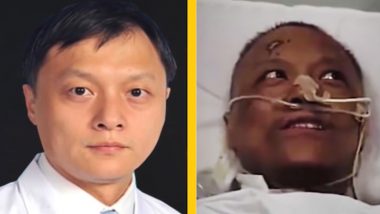 Remember, Dr Yi Fan and Dr Hu Weifeng from Wuhan, whose skin colour darkened because of the COVID-19 treatment? The drastic change in their skin colour raised a lot of questions, and the doctors treating them said that the reason behind the abnormal skin colour was due to the drug that had caused hyper-pigmentation in the doctor’s bodies. While Dr Hu Weifeng passed away, Dr Yi Fan now fully recovered from the disease and his skin complexion returned to normal. A video appeared on social media that show the 42-year-old greeting his colleagues and talking about his condition. His liver values returned to normal and so his skin colour.

Dr Yi, fell ill shortly after the virus broke out in Wuhan, China, before it swept across the world, killing above one million people so far. He is a cardiologist, and he recovered from COVID-19, after doctors kept him on a life-support machine called ECMO for 39 days. Previous videos show the doctor lying in his sickbed wit his dark skin. Another of Dr Yi Fan’s co-worker, Dr Hu Weifeng, contracted the virus on the same day as him and his skin turned dark as well during the treatment. He died in early June this year, after battling the disease for nearly five months.

After taking care of himself, Dr Yi Fan visited Wuhan’s Taikong Tongji Hospital, where he was treated, and a video shows how he now looks just like his old self. He visited the hospital to thank the doctors who helped him recover fully.

Dr Yi Fan and late Dr Hu Weifeng, were both diagnosed on January 18, as per reports. The pair were taken first to the Wuhan Pulmonary Hospital and then transferred to Taikong Tongji Hospital. After doctors kept Dr Yi on a life-support ECMO machine for about 39 days, his condition eventually improved. Media reports suggest that Dr Yi has recovered from COVID-19 fully and can now live without assistance.

(The above story first appeared on LatestLY on Oct 28, 2020 07:08 PM IST. For more news and updates on politics, world, sports, entertainment and lifestyle, log on to our website latestly.com).