National Dengue Day 2020: Facts About the Viral Disease Caused by Mosquitoes You Need to be Aware of 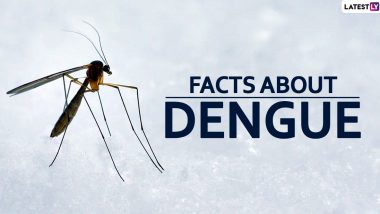 National Dengue Day observed in India on May 16 every year is a day marked to create awareness about the viral disease of Dengue. The Ministry of Health and Family Welfare has made several efforts over the years to raise people’s sensitivity about this disease which continues to plague thousands each year. The mosquito-borne viral disease is widely spread in tropical climates of Asia and Africa where the carrier Aedes mosquitoes thrive. Maintaining proper sanitation and hygiene goes a long way in keeping oneself away from the problem. The central and state governments along with NGOs chalk out the roadmap in the fight against Dengue and this day also acts as a timely reminder for them on the task ahead. National Dengue Day 2020: From Getting Rid of Stagnant Water to Using Repellent Creams, Precautionary Measures to Keep Mosquitoes at Bay.

On National Dengue Day, we take a look at some facts about this disease.

Dengue is a disease that targets both rural and urban population bringing pain and economic burden to families affected. It is the duty of each and every individual to help the government in fighting the viral ailment.

(The above story first appeared on LatestLY on May 16, 2020 11:21 AM IST. For more news and updates on politics, world, sports, entertainment and lifestyle, log on to our website latestly.com).